George and Amal Clooney are reportedly expecting their first child

Their wedding in Venice two years ago was the stuff of true fairytales (seriously; we are still swooning over the dresses - plural!)

And now it looks like George and Amal Clooney could be in for an even happier ending.

According to (as yet unconfirmed) reports, the couple are expecting twins. 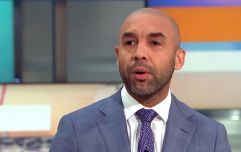 END_OF_DOCUMENT_TOKEN_TO_BE_REPLACED

According to New York Magazine, the news was broken by Lebanon newspaper The Daily Star, as opposed to the usual tabloid suspects - a fact which, they suggest, makes it slightly more trustworthy a rumour.

Squeel! Please let this be true – can you just imagine how good looking those babies would be?!

The newspaper quotes a "family friend" who claims that Amal is pregnant.

And just to add fuel to the fire, the last time the Clooneys were seen in public was at an event to celebrate the the Motion Picture & Television Fund's 95th anniversary waaay back in October.

In fairness, the pair are notoriously private about their personal lives, so it is pretty unlikely that they'll confirm or deny the news any time soon - so we'll simply have to wait and see.

In the meantime; let's all get excited about what they are going to name those babies!!

Girls With Goals || Her · Ep.161: Feeling Peachy - Sharon Keegan of Peachylean on being an absolute BOSS!
popular
Top 10 best staycation experiences in Ireland revealed
Britney Spears' dad Jamie says he is "sorry" to see daughter in pain
Woman escorted from Disney World for "inappropriate" top
Will Britney ever be freed?
All of the Love Island couples that are still together (and those that aren't)
Newborn needs 13 face stitches after being cut during emergency C-section
A BBC documentary on the Peru Two is coming next month
You may also like
1 week ago
"Whereabouts unknown" of woman who gave birth to 10 babies
1 week ago
FM104 apologise for "making light" of voicemail from 4-year-old boy with additional needs
2 weeks ago
"Another pickle!" Stacey Solomon is expecting her fourth child
2 weeks ago
Record breaking: Woman gives birth to 10 babies after four were missed in scans
2 weeks ago
Balenciaga and Crocs team up to make stiletto sandals
2 weeks ago
Postmortem to be carried out on baby girl who died in dog attack
Next Page