Grey's Anatomy fans are furious over the way that Alex Karev's exit is seemingly being handled.

Justin Chambers, who plays Alex, announced last month that he had left the long-running medical drama after 15 years. His final episode is said to have already aired, leaving lots of questions about how Grey's would write him out of the show.

Well, it looks like fans may have their answer - and they're not happy about it. We'll be honest, we're going with 'may' because we're in total denial about the way things are looking.

Warning: The rest of this story contains spoilers for Grey's Anatomy's most recent episode Save The Last Dance For Me. 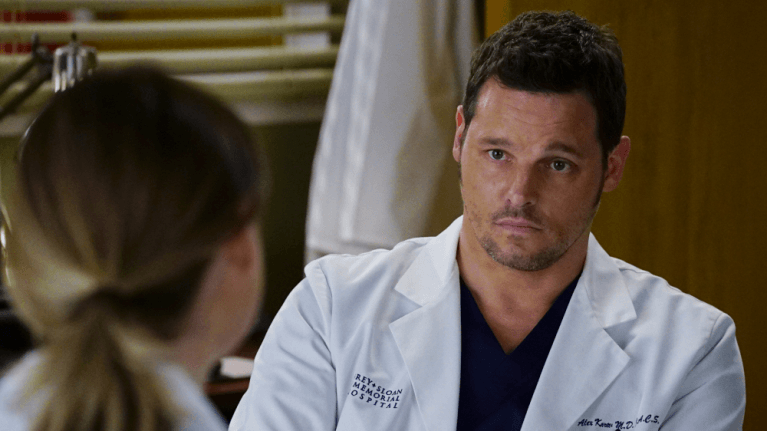 Alex was last seen on-screen in the episode which aired just before the mid-season finale in North America. Since then, he's been helping out with a family situation in Iowa - with characters making passing references about him since then.

The most recent episode saw Dr. Richard Burke reveal that Catherine had bought Pac North - and when he texted Alex the news, he replied with a laughing while crying emoji and a party hat. And then later on, Jo revealed her husband was still in Iowa - but he wasn't responding to her phone calls.

"He says that he's going through something and he needs time, and if I didn't know better, I would think he was getting revenge for when I needed time. But I know he would never do that, so ... I'm sorry. I'm anxious," she told Amelia.

Fans were left furious over the idea that Alex would ghost the love of his life, Jo - especially after everything that they have been through together. But regardless of how his exit plays out, fans weren't too happy about the relationship update.

Alex would never ghost anyone. He hunted down Meredith when she disappeared after Derek died and he called Izzy constantly when she flaked after almost killing that kidney patient. Not buying it. Try again. #GreysAnatomy

I think they’re building for Alex to have been in some kind of accident and die, which is why he hasn’t been returning Jo’s calls. #greysanatomy
Boo.

Exactly. After Izzie left Alex out of the blue like that (which was an awful thing for the writers to do with her character), there’s no way that Alex would leave and do the same thing to Jo and the people who care about him, especially after saying how much he loves Jo and etc.

Idk if I would rather have the writers kill Alex off somehow or put up with this terrible writing to his exit. 16 seasons in and Alex's character is dismantled? That's cold. #greysanatomy @GreysABC

They really going to do my boy Alex like this? #GreysAnatomy pic.twitter.com/5jIlceDNKc

All these years of character growth & development for them to have Alex go out like this. Smh. #GreysAnatomy

Listen. What we’re not going to do is play up Alex Karev us someone who just disappears on Jo because he didn’t get a proper exit!!!!! #GreysAnatomy

popular
The Body on The Cube has finally been unmasked after 11 years
"I want to be a mummy:" Sam Smith on their dream to have children
WATCH: Paul Mescal and Daisy Edgar Jones's first Normal People audition is stunning
Adele's American accent on SNL is making us feel some kinda way
Too many people with Covid symptoms not self isolating, says Tony Holohan
Costa is selling Terry's Chocolate Orange hot chocolate this Christmas
One of Europe's "most dangerous" criminals last seen in Dublin, says Europol
You may also like
1 month ago
QUIZ: How well do you really remember the first episode of Grey's Anatomy?
2 months ago
QUIZ: Can you remember the names of these doctors who have left Grey's Anatomy?
2 months ago
Irish actor Richard Flood promoted to series regular on Grey's Anatomy
3 months ago
Grey's Anatomy will tackle the Coronavirus in season 17 and its impact on frontline staff
6 months ago
Grey's Anatomy boss says there 'wasn’t even a debate' about Alex Karev's exit storyline
6 months ago
Season 16 of Grey's Anatomy begins in Ireland tomorrow night and the excitement is real
Next Page