Good morning and welcome to the best day of the year; the day Harry Styles decided to grace the world with a new track.

We knew he was working on new music after comments he made earlier this year, but the only hint that something was imminent was the posters bearing the words 'DO YOU KNOW WHO YOU ARE?' that popped up in London and New York City in recent days, along with the letters TPWK. Fans guessed this stood for Treat People  With Kindness, a phrase that featured on his last tour's merch, and made the connection.

Now Lights Up is here and people have a lot of feelings. Harry Styles started trending worldwide on Twitter within minutes. 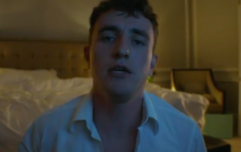 END_OF_DOCUMENT_TOKEN_TO_BE_REPLACED

The song might best be described as a grower (give it a few listens) but it's the video that's really gotten fans excited.

In it, Harry writhes around with a group of men and women, wears sequins, croons from the back of a motorbike and is eventually stopped by police. He's also soaking wet pretty much throughout.

The video, the song's lyrics (check them out here) and the fact that today is National Coming Out Day, have prompted some fans to call Lights Up a bisexual anthem.

harry styles: a man releasing a song along with the video dancing with a bunch of naked men and women on national coming out day, not giving a fuck about people assuming his sexuality, doing it his way, topping the charts and trending # 1 worldwide. PERIOD pic.twitter.com/3vVLm7aThC

Who knew yesterday that this morning on Oct 11th National Coming Out Day that they would be watching @Harry_Styles having the time of his life among a bisexual love fest? And it is beautiful, Harry. #LightsUp pic.twitter.com/tf2jSLhY4F

We look forward to the full album and more visual masterpieces from Harry in the near future.


popular
How to cope in this humidity: From sleeping better to dealing with frizzy hair!
Two women survive 15 hours in the water in Galway Bay
This no bake 'Chocolate Refrigerator Cake' recipe has us drooling
Power ponytails and perfect messy buns! Here's some TikTok hair hacks to try at home
7 skin care wonders: beauty products I just can't live without in my 30s
Irish influencer Lisa Jordan reveals her little boy's name and it's so cute
According to experts lunchboxes could be a big transmitter of Covid-19

You may also like
8 hours ago
QUIZ: How well do you remember these song lyrics from 2009?
3 weeks ago
WATCH: Beyoncé releases trailer for upcoming visual album, BLACK IS KING
1 month ago
McFly has signed a new record deal. After 10 years, our patience has finally been rewarded
1 month ago
WATCH: Irish female artists record powerful cover of The Cranberries' 'Dreams' for charity
2 months ago
The Weeknd donates $500,000 to Black Lives Matter causes
2 months ago
Britney Spears has gifted us a new song, securing her status as a true lockdown icon
Next Page