The grand finale of the insanely popular Sex and The City series was a bit of an anti-climax.

For a show that promoted the idea that women did not need to get married to be happy, it sort of went against all the messages that were at its core.

All of the storylines were wrapped up in a bow, and Carrie goes off into the sunset with Big - it was all just a bit too chic flicky. 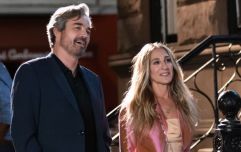 END_OF_DOCUMENT_TOKEN_TO_BE_REPLACED

And it has been revealed that the show's creator, Darren Star, agrees.

Speaking to Deadline, Star admitted that he felt the final episode "ultimately betrayed" what the show was about.

“I didn’t break those last episodes.

“If you’re empowering other people to write and produce your show… at a certain point, you’ve got to let them follow their vision.

“But I think the show ultimately betrayed what it was about, which was that women don’t ultimately find happiness from marriage. Not that they can’t. But the show initially was going off script from the romantic comedies that had come before it. That’s what had made women so attached.”

He also spilled the beans on the alternative endings - producers toyed with having Carrie's then-boyfriend Alexandr Petrovsky follow her home to New York.

The other (and our favourite) would have seen Carrie go home from Paris alone.

Which ending do you prefer?

popular
The First Quadrillionaire? Paypal Accidentally Gives Man $92 Quadrillion
Someone has ranked the penis size of men from all over the world
Why Are Men so Obsessed With Boobs? The Answer is Pretty Surprising...
At least seven bodies have been found in search for Brian Laundrie
Tesco is refunding 27,000 customers after overcharging them
Three month sentence of Garda for domestic violence is "appalling" says Women's Council
So are we dating?... 10 signs it's time to define your relationship
You may also like
4 weeks ago
Tributes paid as Sex and the City star Willie Garson dies aged 57
2 months ago
Sex and the City creator talks about unaired scene that was too shocking for TV
2 months ago
Fans are convinced they know what happens to Samantha on SATC reboot
2 months ago
The script for SATC reboot got leaked... and it's not looking good for Carrie and Mr. Big
2 months ago
Kim Cattrall could return for season two of And Just Like That
2 months ago
Charlotte and Miranda's children are all grown up in SATC reboot
Next Page