Let us get this out in the open: We love Idris Elba.

From Stringer Bell in The Wire to John Luther in, well, Luther, nobody else can pull off effortlessly threatening charm quite like Elba.

Plus he's usually the best part of everything he's a part of. See: Pacific Rim, Thor, Finding Dory, Prometheus, Zootropolis, The Jungle Book.

Double-y plus, Macklemore is well aware that he has just about the greatest voice in the universe, which is why he got him to sing the chorus to this crazy catchy track: 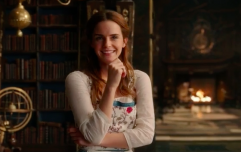 END_OF_DOCUMENT_TOKEN_TO_BE_REPLACED

Over the years, we've been hearing who should replace Daniel Craig once he steps out of 007's tux, and despite Elba being a perfect fit for the part, we've unfortunately heard responses that ranged from ageism (despite Elba being 4 years younger than Craig, and several months younger than Ben Affleck, who plays Batman by the way!) and out-and-out racism.

And it turns out that Bond isn't the only big role that Elba has missed out on.

He is currently on the promotional trail for his new drama The Mountain Between Us, in which he stars alongside Kate Winslett as a plane-crash survivor, when he was asked if there were other major characters he didn't get the chance to play (via People):

"I honestly love musicals. I auditioned for Beauty and the Beast. I really did, for Gaston. I called and said, ‘Listen, I want in!’ So somewhere they have a tape of me singing."

Beauty And The Beast is currently the biggest box office hit of 2017 ($1.262 billion. With a 'b'.), so is Elba a little bit jealous that Luke Evans got the part instead?

Well, we love you, Idris! And as much as Luke was great in the part, who wouldn't want to see Idris completely killing it in this scene?

Girls With Goals || Her · Ep.161: Feeling Peachy - Sharon Keegan of Peachylean on being an absolute BOSS!
popular
Is that Seth Rogen without a beard?
Woman buys 148 year old house, goes viral after finding secret passage way
Harry Styles accepts BRIT for Best British Single - with American accent
Little Mix pay tribute to Jesy as they make history at BRIT Awards
Norman Lloyd, 'world's oldest working actor', passes away aged 106
Lewis Capaldi muted by BRITs during chaotic, swear-y speech
9 Dublin restaurants with outdoor dining we've already booked a table for
You may also like
3 years ago
Disney have created the cutest Chip dessert and we're booking flights now
3 years ago
Penneys' new beauty collection is Beauty and the Beast themed... and wow
3 years ago
The newest Chip cup piece in Penneys is both cute and useful
3 years ago
This magical Disney advent calendar is available for half price right now
3 years ago
These Disney inspired bridal heels will make you feel like a princess
3 years ago
These €6 Beauty And The Beast rose stem drinking cups have now landed
Next Page