Eoin Colfer has given fans an update about on the Artemis Fowl movie after the film's move to Disney+.

The film had been scheduled to land in cinemas in late May. However, due to the coronavirus pandemic, it will now be skipping cinema release - and instead, go straight to the streaming service.

The author was speaking to Ray D'Arcy on RTÉ Radio 1's The Ray D'Arcy Show yesterday [April 6], when he spoke about why he had been "pushing" for the fantasy epic to move from cinemas.

"The drama [of where it will be released] has been going on for the past few weeks. But the conclusion, that it will be going straight onto Disney+, was the one that I had been pushing them for," he said.

"Now, I don't think they decided to do it because I asked for it. But [I felt] the only way that people were going to get to see this this year and possibly next year was on Disney+ because everything has been pushed out by the coronavirus by at least a year."

Disney+ landed in Ireland and the UK at the end of last month, after debuting in North America late last year.

And with most productions around the world shutting down due to the Covid-19 pandemic, the author explained he was told the switch was made as a "test" to see if straight-to-streamer debuts would work.

"Disney+ suddenly became the most profitable arm of Disney overnight. It used to be the parks, but the parks shut down. And so Disney+ needed content. And they talked about it, and [thought] what better way to put this big, tentpole movie on Disney+," he said, admitting that the movie from cinemas to the streaming service is "exciting." 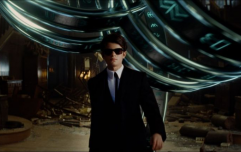 Artemis Fowl to skip cinema release and debut on Disney+

END_OF_DOCUMENT_TOKEN_TO_BE_REPLACED

"My friends have said t's not really a big thing in their lives that it has moved or shifted platforms. I was talking to an agent in Hollywood, a friend of mine and he said it's all changed forever," he continued.

"People aren't going to go back to waiting three months to see something they're going to want it straight away. The logic that they gave me for the Artemis switch is that it's like a test. They're going to see how this goes, and if it goes well then [straight-to-streamer debuts] will happen more."

He also spoke about the possibility of more Artemis Fowl coming to the big screen at some point - and it looks like it's (possibly) good news.

"It's all very mysterious the Netflix numbers and the Disney numbers. I don't really understand them, not that I really go looking for them," he said.

"I think the measure of success would be if they call me in a week and say 'we want to do a sequel'. Then I would say that would be successful. I've only sold Disney the first book so if they wanted to do more they'd have to come back to me. That would be great if that could happen."

As for when fans will be able to watch Artemis Fowl, Colfer said he would, ideally, like it to stick to its May 29 release date - although right now, the exact date is uncertain.

"What they've said so far [is], the 29th of May is what they're trying to stick to - but at the moment, they're saying it's just going to be a big summer release," he explained.

"We don't know for sure. But I would like to see it stick to the same date because that's what we were geared up for."

popular
4 new additions to Netflix to spend your weekend watching
QUIZ: How well do you remember the first episode of Gilmore Girls?
Selling Sunset's Chrishell Stause reveals "the brokerage has split"
Paul Mescal didn't win an Emmy and that's okay
5 Netflix releases to keep an eye out for in October
Kate Middleton has addressed the rumours that she's pregnant with her fourth child
Here's what happens on every day of your menstrual cycle (roughly)
You may also like
1 year ago
The first official trailer for Artemis Fowl has been released
3 years ago
Disney is looking to cast an Irish person in the lead role of this new movie
1 week ago
QUIZ: Can you guess the Disney movie from a single image?
1 week ago
Everything you need to know about the new series of the Great British Bake Off
1 week ago
Gogglebox Ireland returns to TV tonight and there's some new faces!
1 week ago
Selling Sunset's Christine Quinn wants her own show ASAP, and yeah same tbh
Next Page