Kylie Minogue, Gary Barlow and The Coronas on the bill as lineup for Concert4Cancer revealed

The concert will air tonight.

The full lineup for tonight's Concert4Cancer was released this week, and it's set to be some show.

The concert will see a number of the biggest names in Irish music perform their songs, to raise money for the Marie Keating Foundation.

The full lineup for the gig is: 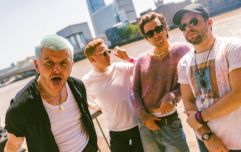 Missing gigs and music in general? Have no fear, we're hosting a private video premiere party with Wild Youth

END_OF_DOCUMENT_TOKEN_TO_BE_REPLACED

There will also be a special guest appearance from the legendary Kylie Mingoue.

The two-hour music special, which was organised by Ronan Keating, will air at 9pm on Friday (28 August).

The Marie Keating Foundation’s income has been devastated by the Covid-19 pandemic, down an estimated 35-40 percent.

Liz Yeates, CEO of the Marie Keating Foundation, said: "Without government funding we have had to make very hard decisions and prioritise some services.

"We are so grateful to everyone who has worked so hard to make this concert a reality for us and we are hopeful that the generosity of the Irish public on Friday night will mean we can restore our full services and ensure we are supporting as many people on the cancer journey as possible."

Girls With Goals || Her · Ep.160: The Beauty Of Coaching - Hayley Harrison joins us from Sport Ireland
popular
Body found in search for missing woman in Waterford mountains
Queen signs note 'Lilibet' in final goodbye to Prince Philip
Roz Purcell introduces 4 - 30 sizing for new Hike Life collection
Someone has ranked the penis size of men from all over the world
Jockey Lorna Brooke dies aged 37 after racecourse fall
The Queen has banned Meghan Markle from wearing any of Princess Diana's jewellery
Here's the average age people lose their virginity around the world
You may also like
3 months ago
LISTEN: New music from the Wild Youth lads, 'Champagne Butterflies'
3 months ago
Daniel O'Donnell warns fans about fake Facebook page
9 months ago
Dermot Kennedy has released a brand new song about hope
1 year ago
Versatile ready to make history as first Irish hip hop act to play and sell out the 3Arena
2 years ago
Westlife just shared a sneak peek of their brand new track and we're beyond ready
2 years ago
This Irish lad singing Elvis Presley will honestly give you major shivers
Next Page