Liam has finally answered whether or not he married Cheryl

Liam Payne has finally answered the question we've all been asking - has he married Cheryl? The singer sent fans into a frenzy recently when he referred to her as his 'wife' in not one but two separate interviews.

The first was on Sirius XM and the other one was for the French website, On The Move. Both times he casually called her his wife by dropping it into conversation. 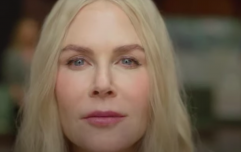 END_OF_DOCUMENT_TOKEN_TO_BE_REPLACED

So, when People Magazine got to talk to him, they questioned him about what he meant by it. He said, “In the U.K., you say ‘the Mrs'".  He also added that they might get married some day, saying, "maybe one day.”

However, if he has just said 'the Mrs' then that would be a different story, but because he said my 'wife' on two separate occasions we're not fully convinced by him.

Perhaps Cheryl gave out to him for letting their secret slip.

Also during the interview, he said that Bear looks just like him.

"He’s just big in general — he’s humongous. I’m going to get a sore back. He’s a big boy! He’s healthy, he’s strong, he likes his bouncer.

I thought he looked like me, but then I saw a picture my mom sent me of myself when I was a baby and I was like, ‘Whoa. I was a chubster baby'.”

Girls With Goals || Her · Ep.161: Feeling Peachy - Sharon Keegan of Peachylean on being an absolute BOSS!
popular
The DIY frozen coffee recipe that's so delicious you'll never pay for an iced latte again
Summer fashion: I got my entire staycation wardrobe sorted with these 7 buys
Wayne and Coleen Rooney spotted holidaying in Ireland
Khloe Kardashian has JUST confirmed she is pregnant
Planning on visiting the Disenchanted set this weekend? Taxi requests are up by 142%
If you're not making your overnight oats in used Nutella jars you're not living life to its full potential
25 things to do when you are feeling bored – that does not involve scrolling on a screen
You may also like
1 week ago
The film adaptation of Matilda: The Musical is coming next Christmas
1 week ago
Hundreds of extras needed for Olivia Colman film shooting in Kerry
2 weeks ago
Holby City cancelled by BBC after 23 years on air
3 weeks ago
We have an official date for Season 3 of Virgin River – and here is what we know so far
3 weeks ago
Friends' Matthew Perry and Courteney Cox are actually "related"
3 weeks ago
Husband’s brutally honest review of home makeover labelled ‘best reaction ever’
Next Page