Louis Theroux is to launch his own podcast next week

Episode 1 of Grounded With Louis Theroux is kicking off next week.

While it may seem like everyone you've ever known has started or appeared on a podcast at this point, there are some people who we would happily listen to for hours.

One of those people is Louis Theroux.

Like the majority of people, Louis is stuck at home, but he’s using his time in lockdown to track down some high-profile people he’s been longing to talk to and will be interviewing them in a new podcast, the BBC has confirmed.

In each episode, around an hour long, Louis will have a conversation with one guest, digging into the psyches of some of the biggest names across the world.

The first episode will be a conversation with writer and documentary-maker Jon Ronson, who is currently grounded in New York. They discuss their professional rivalry, inhabiting similar worlds and how Jon is handling the lockdown.

In other episodes, Louis will speak with Lenny Henry, Boy George and Miriam Margolyes, with more guests still to be announced. 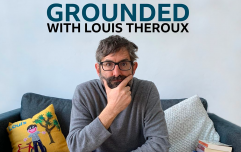 12 of the best podcasts we listened to during lockdown

END_OF_DOCUMENT_TOKEN_TO_BE_REPLACED

Speaking about the launch of the podcast, Theroux said: "I've really loved doing these interviews. It's been a chance to speak to people I admire and have in depth conversations with them, about their lives, their careers, and their most intimate feelings.

"Making a podcast and radio series is very different to my usual way of working. And for that reason, I've found it very fun and refreshing."

Episode 1 of Grounded With Louis Theroux launches on 27 April, while an introduction to the podcast will air on Monday 20 April.

It will be available to listen to on BBC Sounds.

popular
Staycation: TripAdvisor reveals the top 10 hotels in Ireland for 2020
Rupert Young, twin brother of Will Young, passes away, aged 41
QUIZ: How well do you know The Young Offenders?
WATCH: The trailer for Netflix's Ratched is here
War Paint: Ireland's first makeup brand for men has just launched
WATCH: Sneak peak of Paul Mescal in latest Rolling Stones' music video
"Deeply and unreservedly sorry:" Ryan Reynolds apologises for marrying on former slave plantation
You may also like
3 months ago
Her Quarantine Quiz Week 4: Unforgettable podcasts
4 months ago
Dying For Sex: The podcast changing the way we think about sexuality - and death
5 months ago
WATCH: An Irishman Abroad creator Jarlath Regan on making comedy that's not offensive
5 months ago
Laura Whitmore wants to see these Islanders couple up next and people are divided
6 months ago
Love Island's Callum Jones is actually a member of a very unpopular boyband
6 months ago
Finding it hard to keep up with Love Island? We've the lowdown for you here
Next Page