Altered States is due to air in November.

Louis Theroux returns next month with three new films. And finally, it has been announced what they are about.

The three film series is called Altered States “exploring the unusual ways modern America deals with birth, love and death,” and the changing laws that have transformed how the population experiences them. 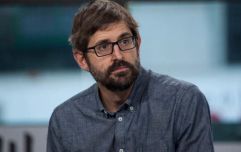 Louis Theroux is taking applications to work with him

END_OF_DOCUMENT_TOKEN_TO_BE_REPLACED

We now know that the films will be about polygamy, the adoption industry and assisted suicide.

The first film is called “Love Without Limits” and will focus of polygamy, and ethical non-monogamy – “the practice of openly and transparently having multiple relationships that go further than just sex”.

Louis embeds himself with families living a polygamous lifestyle, discovering that “for many, more partners means more love and more happiness, but for others, multiple relationships have led to jealousy, upset and broken hearts”.

The next film is “Take My Baby”, on the subject of the multi-million dollar industry around adoption. Theroux spends time with both “birth mothers preparing to hand over their own flesh and blood,” uncovering stories of the poverty, addiction and abuse that led to their situations.

He also meets “the adoptive families paying out huge amounts of money in the hope of being able to raise a child they can’t have by natural means”.

Finally, there is “Choosing Death,” where Louis heads to California, one of the “six states that now offer the terminally ill the option of ending their lives with a prescribed cocktail of drugs”.

He is invited “into the family homes of those who want to end their own lives,” but discovers that “choosing the right time [to die] is not such a simple decision”. He also meets “a group who provide information about how to die to those who don’t fit the criteria”.

Louis Theroux’s Altered States is due to air in November on BBC 2.

popular
You can now get paid to watch every episode of Grey's Anatomy
Love Island: You need to see Millie's dad's Instagram
The islanders are in for a cinematic treat full of their own drama tonight
POLL: Vote now to see which side you're on in this Irish head-to-head battle
18-year-old TikTok star Timbo the Redneck dies after stunt goes wrong
Love Island: Kaz's family issue statement after "vulgar racist abuse"
Love Island fans spot Millie and Liam doing same weird gesture in bed
You may also like
4 months ago
Louis Theroux announces new Tiger King documentary
7 months ago
Dashing Theroux The Snow: The best Christmas jumper you'll bag this year
10 months ago
Here's the top 10 Louis Theroux docs streaming on Netflix right now
1 year ago
Louis Theroux has a new 4-part series coming to the BBC all about, well, Louis
1 year ago
Louis Theroux is to launch his own podcast next week
1 year ago
Cancel your plans because Louis Theroux and Ovie Soko are on The Great Celebrity Bake Off tonight
Next Page