Love Island's Camilla Thurlow and Jamie Jewitt are expecting their first child together.

The couple, who have been in a relationship since meeting on the reality TV dating show in 2017, announced the news over the weekend saying that they had made something decent enough together, and that it was not a video.

"So @jamiejewitt_ and I have managed to make something pretty special and we're not talking about the video...#17weeks #October2020," wrote Camilla on Instagram.

The pair then revealed a photo of an ultrasound while their two dogs looked on excitedly. 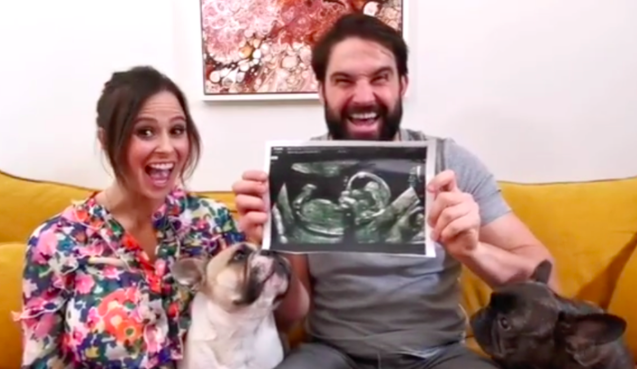 Camilla and Jamie met on the 2017 instalment of the ITV series.

Jamie entered the villa late after Camilla had failed to make a connection with anybody else on the show - apart from Johnny who unceremoniously dumped Camilla for Tyla, but the past is the past, we don't dwell on that now.

The pair finished second in the final behind Kem and Amber, but unlike them, they are still together, enjoying each other's company and expecting a baby later this year.

Dressing up as cats for our friend @cats_tracks 's birthday zoom call last week 🐱🐱! Shockingly we didn't win the fancy dress prize 🤷‍♀️🤣, @jamiejewitt_ did my hair and I cannot tell you how painful it was trying to get the bobbles out 🤣 #cat #fancydress

Camilla told Digital Spy previously that she and Jamie didn't have any immediate plans for marriage, namely due to the fact that it's never been "a priority" for them.

"We’ve always just tried to do things how they suit us, and neither of us are particularly big on marriage. I think it’s so wonderful for other people, and so brilliant," she said.

popular
QUIZ: How well do you remember The Princess Diaries?
Will Smith admits to 'failing miserably' in 21-year marriage to Jada Pinkett Smith
QUIZ: How well do you remember the 2005 movie Pride & Prejudice
Here's what happens on every day of your menstrual cycle (roughly)
Brooklyn Beckham won't let a 10 year age gap get in the way of his new romance
5 new additions to Netflix to spend your Saturday night watching
Security guards were forced to separate Brooklyn Beckham and Hana Cross this weekend
You may also like
1 week ago
Maura Higgins: "You always hear men talking about sex, why can't I do the same?"
3 weeks ago
Winter Love Island has officially been cancelled
1 month ago
Love Island will be airing this summer - the Australian version, that is
2 months ago
'It'll never be right': Laura Whitmore says Caroline Flack's death 'scared' her
2 months ago
Love Island could be shot in a UK villa this year due to #Covid-19
3 months ago
#Covid-19: Love Island's Anna Vakili back to work as a pharmacist amid coronavirus outbreak
Next Page