Love Island's Sharon has apparently been spotted kissing fellow dumped islander Chuggs on a night out.

The civil servant, who was dumped from the villa a few weeks back, and bucket hat business owner Chuggs were seen leaving a bar together in Chelsea, London, looking rather cosy indeed.

END_OF_DOCUMENT_TOKEN_TO_BE_REPLACED

The pair were spotted exiting the bar with their arms around one another, and according to some, they were even sharing a few kisses. Sharon also had her suitcase in tow, so make of that what you will.

The images, which were obtained by The Sun and can be seen here, show the pair enjoying a night out and eventually leaving the pub arm in arm. 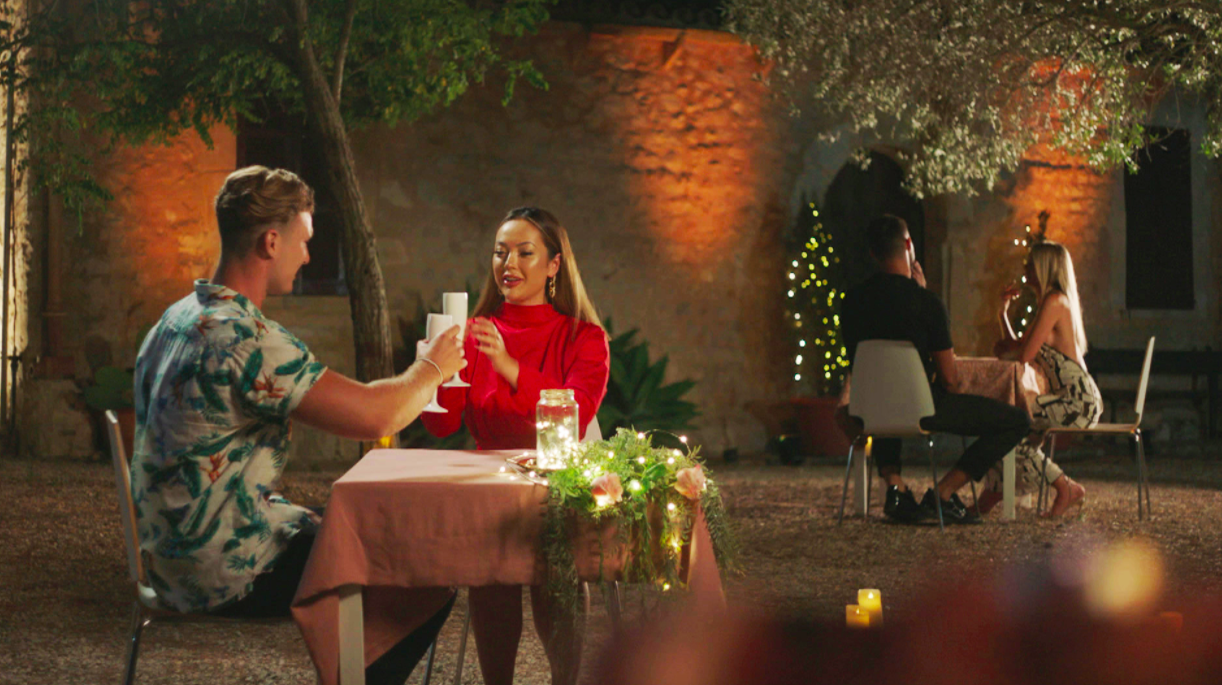 “Chuggs and Sharon couldn’t keep their hands off each other," a source said. "They were kissing and cuddling in the bar - and didn’t seem to mind people seeing them.

“After a while they left and looked like they were heading home together because Sharon had her suitcase.”

Sharon and Chuggs were not romantically involved in the villa but they did share a date together upon Chuggs' late entry.

He was dumped from the villa after a mere 48 hours, while Sharon lost her spot in the competition after failing to find love. She had been coupled up with Aaron and later Hugo as friends before the PE teacher was picked by AJ.

END_OF_DOCUMENT_TOKEN_TO_BE_REPLACED

Since leaving the villa, both Chuggs and Sharon have been engaging in a light amount of flanter (flirty banter) on Instagram.

“Ahh is this what u do when you’re waiting?" Chuggs playfully posted on a photo of Sharon, while she replied: “Can’t believe I’m getting stood up. Ordering 4 tequila shots when you’re sat by yourself isn’t a great look.”

One one of Chuggs' photos, Sharon later said: “I know you wait for my comments."

More of this, guys. Please.

popular
Fashion detox: All you need for the perfect wardrobe is 37 items of clothing
Woman returns to Zara in a jumpsuit after getting stuck trying it on
9 movies on Netflix that make for perfect Sunday night viewing
5 cocktail bars in Dublin you need to book into this year
Someone has ranked the penis size of men from all over the world
Nespresso just launched the most perfect autumn flavoured coffee capsules
How to INSTANTLY unblock your stuffy nose (we swear this works)
You may also like
1 week ago
Love Island's Amy Hart tells inquiry of receiving death threats and abuse
2 weeks ago
Love Island's Toby and Chloe are officially coming to Mayo
2 weeks ago
Laura Whitmore speaks out following Love Island reunion episode
2 weeks ago
Lillie, Millie and Liam reunite on Love Island reunion
2 weeks ago
Love Island's Jake tells Liberty he's "too busy" for a relationship
3 weeks ago
Love Island’s Camilla Thurlow and Jamie Jewitt have gotten married 4 years after the show
Next Page