Netflix users can't get enough of the newest true crime docu-series, Exhibit A

The four-episode TV series, which landed on Netflix on Friday, examines how innocent people have been convicted with dubious forensic techniques and tools, like touch DNA and cadaver dogs.

Each episode examines a new case and a new kind of supposedly ironclad form of evidence.

And if you're looking for a little more information as to which each episode covers (or you want to pick-and-choose which ones to watch), don't worry, we've got you covered. 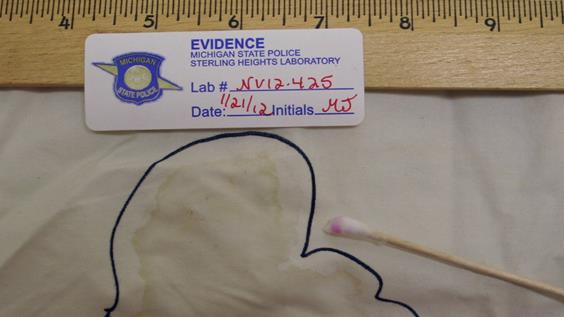 A Texas man is convicted of robbery when forensic experts see what they want to see in their analysis of store surveillance footage.

The limits of forensic science are exposed when flawed blood spatter evidence leads to the conviction of a Texas woman for the murder of her husband.

Assumptions pass for facts when Detroit police misuse cadaver dogs to build a murder case against a man whose daughter has disappeared.

In Brooklyn, an innocent man faces assault charges thanks to statistical DNA testing that relies on deduction rather than proof.

And here's what viewers are saying about the series so far...

Anyone who’s as into crime investigation + justice shows as I am, there’s a new series on Netflix called Exhibit A. Míralo 🤯

go watch Exhibit A on netflix if you’re interested in judicial system and forensic science 👍 pic.twitter.com/lp54BkOyzh

Please watch “Exhibit A” on Netflix! 😂😂😂

And if that's still not enough to convince you to give the series a shot, you can check out the trailer for Exhibit A below.

popular
The DIY frozen coffee recipe that's so delicious you'll never pay for an iced latte again
Wayne and Coleen Rooney spotted holidaying in Ireland
Summer fashion: I got my entire staycation wardrobe sorted with these 7 buys
Planning on visiting the Disenchanted set this weekend? Taxi requests are up by 142%
25 things to do when you are feeling bored – that does not involve scrolling on a screen
Someone has ranked the penis size of men from all over the world
Khloe Kardashian has JUST confirmed she is pregnant
You may also like
6 days ago
Irish Too Hot To Handle star just got a huge record deal
1 week ago
Irish actress Amybeth McNulty cast in Stranger Things season 4
1 week ago
Opinion: The Bold Type is so bad it's good - here's why we can't get enough
2 weeks ago
Sophie Turner joins Colin Firth in HBO's true crime series The Staircase
3 weeks ago
We have an official date for Season 3 of Virgin River – and here is what we know so far
3 weeks ago
Netflix's Firefly Lane renewed for season two
Next Page