Our favourite 90s presenter had a role in Toy Story 2

HOW did we not know this before?

Of all the Pixar and Disney movies the Toy Story franchise has to be the best. All three of the movies are hugely successful due to the clever storylines, brilliant animation and, of course, the talent behind some of our favourite characters. Tom Hanks, Tim Allen, Kelsey Grammer and Joan Cusack to name a few.

While we're all presumably familiar will all those leading actors, we've just found out about another person who we never knew had a part in the movie. It turns out 90s presenter Andi Peters also voiced a character.

That's right, your man from Live & Kicking. Many a Saturday morning were spent in front of the TV watching Andi and his co-presenter Emma Forbes on the BBC. 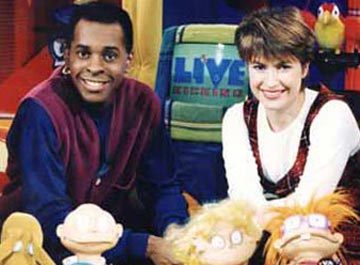 Even though I'm a voice in Toy Story 2, yeah I am; The Lion King is still my fave Disney film and it's on C4 right now. #singalong

He's baggage handler number 1 in the scene where Woodie and Jessie get stuck on the flight. Listen out for his here:

According to Metro, Andi was making a documentary about the movie in America at the time when he got the role. He was working alongside the director John Lasseter who offered him the line.

It may have only been a line, but that's one massive claim to fame.

Want to see what else you might not know about the movie, take our quiz:

Classics, all three of them https://t.co/moQcEZdHjP

popular
Love Island’s Afia explains why Gemma’s dad has not been mentioned on show
Two dumped islanders have confessed their feelings for each other since leaving the villa
Love Island fans concerned over "bullying" of Ekin-Su
Shaughna Phillips brands Love Island heart rate challenge "fixed" and "vile"
Love Island fans are in shock after new boy Charlie revealed his age
PSA: Casa Amor is happening - and soon
Selling Sunset star quits show as it's renewed for two more seasons
You may also like
9 months ago
Coco is officially the Ireland's favourite Pixar film, according to science
10 months ago
Nicolas Hoult cast in lead role of Dracula spinoff movie Renfield
11 months ago
QUIZ: How well do you remember Uptown Girls?
11 months ago
Don't panic but Chris Pine has been spotted in Ireland
1 year ago
Enchanted sequel: New pictures from the Enniskerry set as filming gets underway
1 year ago
Dear Evan Hansen: The award-winning musical is heading for screens and the trailer is here
Next Page