An article highlighting how Prince George has become a "gay icon" to some people has sparked controversy online.

The original piece, which was published last month with the headline "People think Prince George looks fabulous in this new photo", reported how people on social media labeled the prince a "gay icon".

The article was published on PinkNews after the four year old was photographed with his hands on his face in a helicopter in Germany.

And now Jim Allister, leader of the Traditional Unionist Voice (TUV) party, has hit out at the article - describing it as "grossly offensive".

"To take an image of a little boy and to fantasise of him being an icon for a life defined by sex is outrageous and sick.

“With multiple media outlets clearly obsessed with LGBT issues I find it amazing that this inconvenient article has been completely ignored.

"While anyone who dares to challenge whatever the latest demand of the LGBT lobby is will be subject to scrutiny this grossly offensive article has passed without comment.

“I would have referred Pink News to the Press Standards Organisation but it appears that they have not signed up to the Editor’s Code of Practice.

"I am interested to know why Pink News have broken with the norm across most of the industry in the UK by not signing up and have requested an explanation.”

Chief Executive of PinkNews Benjamin Cohen insisted the publication had not labeled Prince George a gay icon, but "merely reported on a large number of social media posts saying that he was".

I hope Prince George turns out to be gay 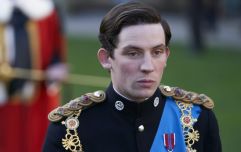 END_OF_DOCUMENT_TOKEN_TO_BE_REPLACED

He added that he was surprised that the "minor article" had been spotted on their site by Mr Allister.

He says he had not received any form of communication from Mr Allister, but that his letter  contains a number of "concerning points".

Mr Cohen said in a statement to Mirror Online:

"At no point did PinkNews state that Prince George is a ‘gay icon’- the article merely reported on a large volume of social media posts saying that he was.

"The article also explored what it means to be a gay icon and referenced other ‘gay icons’ such as the pop singer Ariana Grande.

"Mr Allister also appeared to claim that being gay is a 'life defined by sex'. This is an outrageous statement. I am gay and about to marry fiancé, something Mr Allister opposes, and I can certainly say that my life is not defined by sex.

"I am also surprised that the media reporting on this story does not mention in its report that Mr Allister is a politician who has strongly opposed LGBT rights for as long as he has been involved in politics.

"Mr Allister opposed the decriminalisation of homosexuality and was the only member of the Northern Irish Assembly to oppose pardons of gay men convicted of offences that would not be crimes today.

"Mr Allister is not an impartial commentator on this issue, he is a person with a long history of opposing the rights of LGBT people."

popular
Strictly's Giovanni Pernice responds to dating rumours following split from Maura Higgins
Vicky Phelan says terminally ill people should have right to decide how to die
The internet is saying the same thing after Ryan's Toy Show opening
You can rent out the house from House of Gucci on Airbnb
The best memes from this year's Late Late Toy Show
We finally know what happened to Sam in And Just Like That
Omicron variant symptoms are mild so far, says doctor who discovered it
You may also like
2 weeks ago
Meghan Markle says Royals were "constantly berating" Harry over her relationship with her father
2 weeks ago
Meghan Markle apologises for forgetting she briefed biography authors
1 month ago
Ant McPartlin opens up to Kate Middleton about his struggle with addiction
1 month ago
Richard Madeley under fire for comments about Kate Middleton's waist
1 month ago
William and Kate thank Derry community during "inspirational" visit
4 months ago
Prince George's godmother keeps Princess Diana's birthday tradition alive
Next Page