REVIEW: As Above, So Below, A Bonkers Horror That Is Actually Pretty Entertaining

Horror as a genre is in flux. While directors like James Wan continue to get audiences in to cinema seats, there still hasn’t been any great change from using all the tried and tested methods of scaring the living daylights out of people. Cinema audiences are completely au fait with extreme scare tactics, where certain ghosts are going to jump out, what doors may close unexpectedly and what might happen when you look at that mirror. As a genre, horror is the most difficult to re-invent and find new directions for. Interestingly, it’s weighed down by its fanbase who constantly require new ways to prevent sleep.

With this in mind, horror films have increasingly turned to historical events or historical myths for their plots. That’s not to say that this particular type of film has not been seen in the past, it just seems that now it is old ground to go over anew. With productions like The Conjuring (supposedly based on actual events) and upcoming The Pyramid, directors and writers are increasingly looking for inspiration in fact. 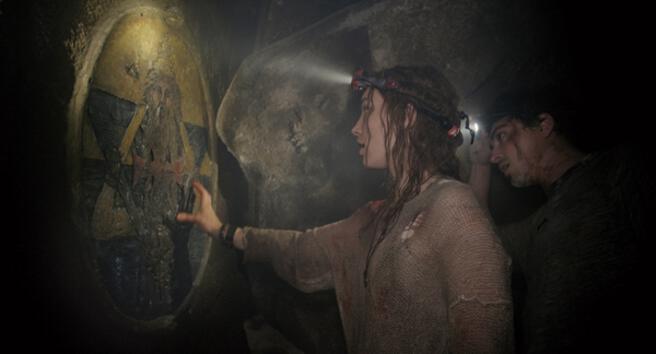 END_OF_DOCUMENT_TOKEN_TO_BE_REPLACED

As Above, So Below revolves around Scarlett, an academic who is on a quest to find the Philoshopher’s Stone. Following her father’s suicide, Scarlett does everything in her power to try to track down the one thing that managed to elude him over the years. However, Scarlett is more than willing to put herself in dangerous situations in order to find out more information about where the stone is located, a mission that leads her to the Catacombs in Paris.

Using an illegal guide and his band of friends, Scarlett enlists the help of her friend, George, a friend she abandoned on their last adventure. The further they go into the Catacombs, the closer they feel they are to finding something. However, when they do make a discovery, they soon find out this is something that would have been best left alone.

As Above, So Below is a strange horror. It should be absolutely awful in theory, the script is laugh-out-loud in parts, the acting a little below par but this somehow proves to be the perfect combination. Lulling you into a false sense of security by being hilarious in parts, you will never see the actual horror about to hit and there are quite a few jumps over the course of the film. Safe to say you will probably never visit the Catacombs or in fact go underground at all after watching this.

By using the old Philosopher’s Stone tale, a myth which is a substance said to be capable of turning metal into gold, the film soon gets bogged down in its crazy plot. While the filmmakers think they’re actually being quite smart, they slip up on a few occasions, making the plot ridiculous and the series of tunnels and adventures all the more ludicrous.

Inexplicably, it all works and provides some amazing entertainment. This is actually worth seeing.

popular
Ekin-Su Cülcüloğlu signs the biggest fashion deal in Love Island history
Love Island producers respond to claims Jacques was kicked off the show for "bullying"
Met Éireann extends high temperature warning for Ireland this weekend
Lisa Kudrow addresses lack of diversity on Friends
Five teenage girls in hospital after Kilkenny crash
Love Island's Amber opens up on unaired fight between Remi and Jacques
Andrew Le Page explains why he unfollowed Jacques O'Neill
You may also like
1 month ago
WATCH: The first trailer for Blonde, the first adults-only movie made by Netflix
2 months ago
Pirates of the Caribbean creators not ruling out Johnny Depp's comeback despite trial
4 months ago
WATCH: New camera angle shows Jada Pinkett Smith's reaction following Oscars slap moment
4 months ago
Will Smith was asked to leave Oscars but refused to leave, Academy says
4 months ago
Will Smith apologises to Chris Rock for slapping him at Oscars
4 months ago
WATCH: The trailer for Where the Crawdads Sing is here
Next Page