Actor Robert Pattinson has told US talk show host Jimmy Kimmel of how he was asked to perform a sex act on a dog for a scene in his new film, Good Time.

According to Pattinson, his character, Corey, thinks he has control over animals.

During the scene in question, Corey is sleeping in the same bed as a dog when a drug dealer crashes into the room. He was, in Pattinson's own words, "basically giving the dog a hand job.” 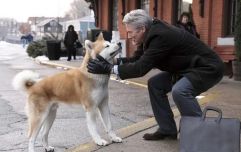 END_OF_DOCUMENT_TOKEN_TO_BE_REPLACED

Pattinson told Kimmel that he was asked to perform the act for real, with the film's director saying: “just do it for real man, don’t be a pussy.”

The dog's trainer also gave the actor some advice, saying that he should massage the dog's thighs.

Pattinson, thankfully, refused to carry out the act and a fake dog penis was used instead.

The scene in question did not make it to the final cut of the film.

Good Time is directed by Ben and John Safdie and will be released in the US this month.

popular
Tommy Fury responds to Jake Paul ruining his baby news
Looks like Maura Higgins knew Molly-Mae's baby name this whole time
Here's why Nicola Peltz-Beckham's family are suing her wedding planners
Love Island's Zara speaks out after being dumped from the villa
Love Island's Haris spills all on an unaired fight between Zara and Tanyel
Gwen Stefani reportedly pregnant with baby number four
We're all getting Hailey Bieber's new box bob haircut in 2023
You may also like
1 week ago
Dog leaves owner in fits of laughter after finding a huge sex toy instead of a stick
3 months ago
The dos and don'ts of keeping your pets safe this Halloween
3 months ago
You can get a bomber jacket for your dog from Aldi
5 months ago
Police footage shows dog being rescued from overheated car
5 months ago
Galway dog charity sees surge in owners surrendering dogs
8 months ago
Johnny Depp threatened to microwave Amber Heard's dog, court hears
Next Page