If you're a fan of the book, this will be worth waiting for.

RTÉ has announced that it will air the TV adaptation of Sally Rooney's Normal People this spring.

Starring Kildare newcomer Paul Mescal in his first television role as Connell and British actress Daisy Edgar Jones (War of the Worlds, Cold Feet) in the role of Marianne, the highly-anticipated 12-part series will be on Irish screens soon enough. 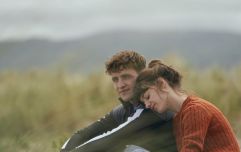 END_OF_DOCUMENT_TOKEN_TO_BE_REPLACED

The book itself was nominated for the Man Booker Prize in 2018, while it was also voted as the 2018 Waterstones' Book of the Year and won Best Novel at the 2018 Costa Book Awards.

Filmed across Dublin, Sligo, Sweden and Italy, Normal People follows two young people navigating adulthood in contemporary Ireland, and their complicated relationship from the end of their school days in Sligo to their undergraduate years at Trinity College.

As of now there is no confirmed date for when the first episode of the 12-part series will be aired, but RTÉ has said that further information will be released soon.

Take a look at the trailer here:

Rooney spoke to Vanity Fair about the creation of the show, saying: "My favourite scenes from the book generally took the form of conversations between the two protagonists—in abandoned houses, in apartment kitchens, in cars, and in bed.

"I'm excited to see those dynamics beginning to unfold in a new way on the screen."

Girls With Goals || Her · Ep.151: 'A Story Shared' - Aoife P. Rafter on blogging during a pandemic and living with CF
popular
Around the world: The most popular baby names in major cities across the globe
"The female gaze is brilliant:" Why Phoebe Dynevor is proud of Bridgerton's sex scenes
Matt LeBlanc And Matthew Perry Reveal Reason Why They Didn’t Attend Jennifer Aniston’s Wedding
Netflix announces new true crime documentary series: The Vanishing At The Cecil Hotel
Here's what happens on every day of your menstrual cycle (roughly)
Someone has ranked the penis size of men from all over the world
When will lockdown end in Ireland?
You may also like
1 month ago
"I'm Irish:" Ireland's most liked tweet this year was from Paul Mescal
1 month ago
"I don’t know where I’d be without her:" Paul Mescal chats new girlfriend in candid new interview
2 months ago
WATCH: Paul Mescal and Daisy Edgar Jones's first Normal People audition is stunning
3 months ago
Paul Mescal didn't win an Emmy and that's okay
4 months ago
Paul Mescal tipped for Emmy win, according to awards columnist
4 months ago
Paul Mescal says any Emmy recognition should be shared with co-star Daisy Edgar-Jones
Next Page