Ryan Thomas came out victorious on Celebrity Big Brother last night, and we have to say, he deserved it.

He looked absolutely shocked as he walked out of the CBB house and shook his head as he left, telling host Emma Willis he was "overwhelmed."

With a simple snap of them closely facing each other in what looks like a hotel lobby, he captioned the post: "HER," along with a red heart.

In the episode last night, Lucy gave her boyfriend a kiss, to which he replied he "needed that" after three weeks apart.

During the controversial series, Roxanne accused Ryan of punching her "repeatedly" in the ribs, and called him a "woman beater."

Ryan received a formal warning from Big Brother, but Roxanne then left the house. 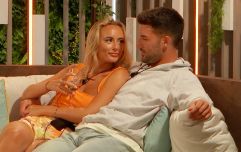 END_OF_DOCUMENT_TOKEN_TO_BE_REPLACED

Speaking about the incident, he said: "It was a sign of affection... there was nothing in it.

"As it unravelled, as it became bigger and bigger, then it scared me.

"We all know how something like that can stick on a man. I just wanted out," he said.

"I felt I was going to be getting a call from the police for doing something untowards to a woman. And that's not me.

"I was glad we had 24-hour surveillance on us, because the point was proven."

popular
A clip has resurfaced of Machine Gun Kelly discussing a teenage Kendall Jenner
People are only realising Kendall Jenner and Gigi Hadid are related and the reactions are gas
Worried about a loved one? Here are 5 signs of suicide to look out for
Seems sudden? This is why the restrictions have completely lifted this soon
FBI reveal that Brian Laundrie is responsible for Gabby Petito's death as they discover notebook
Actress Regina King pays tribute to her son as he dies suddenly
These are the top baby names for 2022
You may also like
2 days ago
Love Island's Amber Gill could be banned from Instagram over ad controversy
2 weeks ago
Rejoice - Instagram is bringing back the chronological news feed
1 month ago
Everything you need to know about Instagram's new 'take a break' feature
2 months ago
Who started the 'plant one tree for every pet picture' trend on Instagram?
3 months ago
Tilly Ramsay speaks out about body shaming after DJ calls her a "chubby little thing"
3 months ago
Influencer charged with drugs trafficking after trying to board Dubai flight with cocaine
Next Page