Scarlett Moffatt and Joe Swash won't be returning for this year's I'm A Celebrity... Extra Camp.

They're both stepping down from the ITV spin-off show ahead of the 2019 series, they have announced.

Joe, who recently welcomed baby Rex with partner Stacey Solomon, said that spending time away from home would be too much to bear this year.

"Being a part of the I’m a Celebrity After Show has been everything I could have dreamed of and more," he wrote.

"But I’ve come to the decision that this year I’m going to have to leave my jungle family and stay home with my wonderful real family."

Former EastEnders actor Joe was crowned king of the jungle in the 2008 series of I'm A Celeb. He has been a part of the spin-off show since 2009. 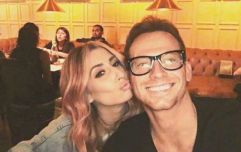 END_OF_DOCUMENT_TOKEN_TO_BE_REPLACED

Scarlett meanwhile co-hosted the show in 2017 and 2018 alongside comedian Joel Dommett.

She and Joel came in first and second place respectively in the 2016 series.

Scarlett said today that she is stepping away due to another project she's working on.

"The jungle absolutely changed my life and I am massively grateful to everybody who voted for me whilst in the jungle and for your constant support to date and everybody who tuned in to extra camp."

Joel has yet to comment on whether he'll be returning to the jungle in November.

popular
Primark reintroduces female-only fitting rooms after two men walk in on woman
Davide Sanclimenti opens up on having kids with Ekin-Su Cülcüloğlu as he turns down Dancing On Ice
8-year-old Ukrainian girl stabbed in Clare 'out of danger'
Anna Delvey is set to be released from prison
Man and woman charged with murder of four year old boy in 2021
Woman tells Kate Middleton 'Ireland belongs to the Irish' during Belfast visit
Why Are Men so Obsessed With Boobs? The Answer is Pretty Surprising...
You may also like
2 days ago
Stacey Solomon and daughter Rose celebrate their birthdays together
1 week ago
Joe Swash has reportedly flown to South Africa to film I'm A Celeb All Stars
1 month ago
Stacey Solomon shares moment Joe saw her after she walked down the aisle
1 month ago
Joe Swash helps 95-year-old woman and carries her to hospital
1 month ago
Stacey Solomon shares tribute to sons who acted as her best men
2 months ago
Stacey Solomon reveals her honeymoon plans and they're adorable
Next Page