Shayne Ward who plays Aidan Connor will be leaving the show next month.

After confirming in February that he would be exiting the show later on in the year, he has now revealed that his exit will occur this May.

Shayne has finished filming his role as Aidan, however Aidan still remains onscreen for now as he has not yet found out that Eva's baby is in fact his. 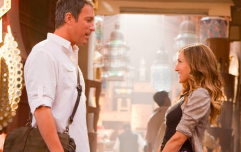 END_OF_DOCUMENT_TOKEN_TO_BE_REPLACED

After almost aborting the pregnancy earlier in the year, Eva's decided to have it but give it to Toyah Battersby, who's struggled with having a baby of her own. Now many fans believe that Eva will tell Aidan the truth and run off with him last minute as Catherine Tyldesley (who plays Eva Price) is too leaving the show.  However, others believe Aidan appears to be paler and more sensitive than ever before, causing speculation that it could be an illness nobody saw coming?

Shayne admitted to the Daily Star: "I had a bit of a breakdown when I filmed my final scene. It’s one of Corrie’s most shocking exits."

END_OF_DOCUMENT_TOKEN_TO_BE_REPLACED

Many fans have followed Aidan's emotional rollercoaster on screen and therefore, it will be tough to watch him finally depart. The exit is expected to be "explosive" according to writers and will blow fans away as they won't see it coming.

We cannot wait to see what happens.

Corronation Street returns to our screens Monday at 8:30pm on TV3.

popular
Looks like Maura Higgins knew Molly-Mae's baby name this whole time
Here's why Nicola Peltz-Beckham's family are suing her wedding planners
Tommy Fury responds to Jake Paul ruining his baby news
Love Island's Zara speaks out after being dumped from the villa
Chrishell Stause faced "unbelievable" trolling for relationship with G-Flip
Wayne Lineker called out for comment on Tommy and Molly-Mae's baby news
Bachelor Nation star Sarah Herron's baby passes away shortly after birth
You may also like
1 week ago
Man claims to have found infant remains near Bessborough site in the 90s
2 weeks ago
"It interferes with your job": Holly Cairns on the abuse of women in politics
2 weeks ago
Gardaí are reviewing "helpful, new" information in Sophie Toscan du Plantier case
4 weeks ago
Ireland set to ban "cruel process" of conversion therapy
1 month ago
Brutal details emerge in Bruna Fonseca investigation
1 month ago
29 puppies rescued from illegal trafficking at Belfast Port
Next Page