Sherif has spoken out for the first time (not including his official statement) since being removed from the Love Island villa.

The former contestant said he decided along with producers that he should exit the show yesterday after breaking villa rules.

He has since taken to Instagram Stories to let his fans know that he is "all good."

"Thank you to everyone including my friends and family for the support I've come back to," he wrote this afternoon. 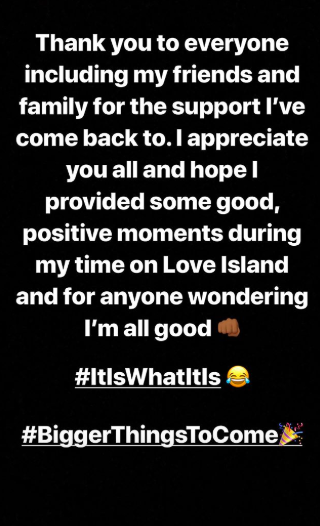 "I appreciate you all and hope I provided some good, positive moments during my time on Love Island and for anyone wondering, I'm all good."

He also included the hashtag '#ItisWhatItis' and '#BiggerThingsToCome.'

END_OF_DOCUMENT_TOKEN_TO_BE_REPLACED

Sherif left the villa yesterday due to an incident that didn't involve any "criminal acts" but was simply a "silly mistake."

“In a case of poor judgement, I broke the villa rules and as a result agreed with the producers that it was best for me to leave the villa," he said.

"I regret that I didn’t conduct myself in the right way and, as a 20 year old guy, it’s something I know I will take on board and learn from.

"I really enjoyed my time in the villa and look forward to catching up with everyone on the outside.”

An official statement from Love Island read: “After breaking the villa rules Sherif had conversations with the producers and it was mutually agreed that he would leave the Love Island villa.”

It is not yet known what Sherif actually did.

popular
Will there be a second season of Gilmore Girls: A Year In The Life? Here's what we know
The Queen has banned Meghan Markle from wearing any of Princess Diana's jewellery
'Beard-baiting' is now apparently a dating trend - and we're all for it
QUIZ: How well do you really remember the first episode of Sabrina The Teenage Witch?
"Like botox, but without needles" – I tested Gua Sha, and the results were impressive
QUIZ: Can you name all 32 counties in Ireland in under 4 minutes?
Kate Middleton has addressed the rumours that she's pregnant with her fourth child
You may also like
1 month ago
Everything you need to know about season two of Love Island USA
1 month ago
Love Island's Dani Dyer expecting first child with boyfriend Sammy Kimmence
2 months ago
Love Island's Marcel expecting first child with girlfriend Rebecca
2 months ago
Have we really come all that far since #BeKind?
2 months ago
Love Island's Lucie and Luke have confirmed they are, indeed, dating
2 months ago
Maura Higgins: "You always hear men talking about sex, why can't I do the same?"
Next Page