Strictly viewers were NOT happy with Tess and Claudia last night

Many viewers criticised the hosts for not donning costumes on last night’s show.

It was Strictly Come Dancing’s annual Halloween special last night, and as expected the stars and judges of the show all donned costumes for the occasion.

However, hosts Claudia Winkleman and Tess Daly did not dress up for the show and many viewers weren’t happy about it.

Even the orchestra are participating in the Halloween theme Tess and Claudia take note ? #Strictly

Why are Tess and Claudia not dressed up? #tryharder #Strictly

Why haven’t Tess and Claudia bothered with dressing up?! #Strictly ?

However, the presenters may have had very good reason for it, choosing to boycott Halloween costumes this year due to an accident Claudia's daughter had in 2015. 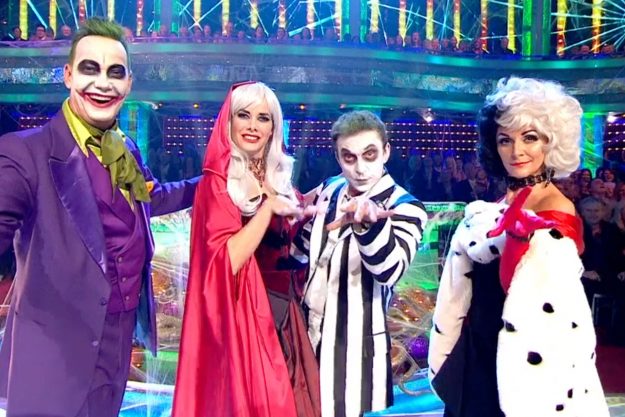 END_OF_DOCUMENT_TOKEN_TO_BE_REPLACED

It’s being reported Claudia is choosing to forgo costumes this year after her daughter, Matilda, was set on fire due to one she wore two years ago.

Since the terrible accident, Claudia has been an avid campaigner for safety regulations when it comes to Halloween costumes.

“I bought her costume from the supermarket, she wanted to go as a witch,” she told the BBC Watchdog after the accident.

"She had a witches hat, and a cape, and I was just talking to somebody and then I heard her scream.

“And she just screamed 'mummy', and I turned around and that was that, she was just on fire.”

Matilda’s outfit hit off a candle and immediately caught fire, one which Claudia says she’d never seen anything like.

popular
The Queen has banned Meghan Markle from wearing any of Princess Diana's jewellery
Will there be a second season of Gilmore Girls: A Year In The Life? Here's what we know
QUIZ: How well do you really remember the first episode of Sabrina The Teenage Witch?
"Like botox, but without needles" – I tested Gua Sha, and the results were impressive
10 Dublin restaurants with outdoor areas we'll be hitting up for the next 3 weeks
'Beard-baiting' is now apparently a dating trend - and we're all for it
WATCH: Simone Biles just did a triple backflip, a move not even recognised in women's gymnastics
You may also like
5 days ago
5 Netflix releases to keep an eye out for in October
6 days ago
The Pursuit Of Love is period drama that will be your next TV obsession
6 days ago
4 new additions to Netflix to spend your weekend watching
6 days ago
Oy with the poodles already! Alex and Ani have released a Gilmore Girls collection
2 weeks ago
Here’s who’s on the Late Late Show tonight
2 weeks ago
Gogglebox Ireland returns to TV tonight and there's some new faces!
Next Page