The creator of Big Little Lies is teaming up with Netflix for the gripping new thriller, Anatomy of a Scandal.

The six-part anthology series, adapted from Sarah Vaughn's best-selling novel of the same name, is described as an “insightful and suspenseful series about a sexual consent scandal amongst British privileged elite and the women caught up in its wake.”

Liza Chasin (The Loudest Voice, Baby Driver) of 3Dot Productions, Bruna Papandrea (Gone Girl, Big Little Lies), Steve Hutensky and Allie Goss of Made Up Stories are set to serve as executive producers, along with Sarah Vaughan, and Margaret Chernin as co-executive producer.

S.J. Clarkson (Jessica Jones, The Defenders) will direct all episodes. She will also serve as executive producer. 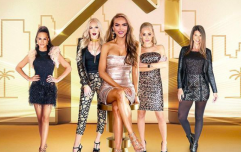 END_OF_DOCUMENT_TOKEN_TO_BE_REPLACED

Anatomy of a Scandal, published by Simon & Schuster in 2017, focuses on a high-profile marriage that begins to unravel when James - a loving husband and charismatic government minister - is accused of a terrible crime.

His wife Sophie is sure he is innocent and desperately hopes to protect her precious family from the lies which might ruin them. Meanwhile, Kate - the barrister prosecuting the case - is certain that he's guilty, and is determined to make him pay.

popular
It turns out we may have been brushing our hair wrong the whole time
Three children and two staff test positive for COVID-19 at Meath creche
The 2021 Ikea catalogue has been revealed – and it is filled with ideas and inspiration
13-year-old boy drowns in tragic accident at Dublin reservoir
Someone has ranked the penis size of men from all over the world
90-year-old grandfather comes out as gay in viral post and inspires millions!
Amy Schumer reveals that her husband Chris Fischer has autism spectrum disorder
You may also like
1 day ago
Love, Guaranteed is the romantic comedy we never knew we needed
2 days ago
5 new additions to Netflix to spend your weekend watching
2 days ago
Netflix have shared the first look at Lily James and Armie Hammer in Rebecca
3 days ago
Gone For Good: The next Netflix x Harlan Coben collaboration we're dying to see
5 days ago
WATCH: The trailer for Netflix's Ratched is here
2 weeks ago
The Half Of It is the Netflix teen romance we never knew we needed
Next Page