There is going to be a Gilmore Girls festival

Whether you've loved Gilmore Girls since it began back in 2000, or have only just discovered it on Netflix, this is the news all fans of the show have been waiting for. 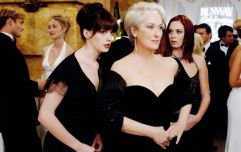 END_OF_DOCUMENT_TOKEN_TO_BE_REPLACED

The weekend festival will take place from the 23rd to the 25th of October in in Washington Depot, Connecticut.

It will take place in this location because of the significance it has with the show.  It's the town that Gilmore Girls creator Amy Sherman-Palladino gathered inspiration from for the show. So basically, it's the real Stars Hollow.

The organisers have gone all out with themed events, according to the website.

They have a town troubadour, there will be tea at the Mayflower, antique shopping, and loads more, and the website promises that they're "working to provide as much caffeine as possible".

If all the events aren't enough to make you want to go, the organisers have also said that a number of cast members will also be attending. These include Kelly Bishop, who played Emily, Yanic Truesdale who played Michel, Ted Rooney who played Morey, and a few more of Stars Hollows residents. No sign of Lauren Graham, Alexis Bledel or Melissa McCarthy just yet though.

The tickets cost €155 for a regular ticket and €222 for VIP access which isn't to bad for a weekend ticket to a festival, but then also we have to factor in flights to America.

popular
Ariana Grande just dropped a breakup song about Pete Davidson AND Mac Miller
Terrie McEvoy responds to trolls who commented on her pregnancy weight
Forget Making a Murderer, This Crime Documentary is Finally on Netflix
Derry Girls star speaks out after show called "distinctively British"
Gwen Stefani reportedly pregnant with baby number four
Someone has ranked the penis size of men from all over the world
Police release bodycam footage of missing YouTuber Gabby Petito
You may also like
5 years ago
People are swooning over Solange Knowles' latest dress
5 years ago
Fans have been left REELING at the outcome of tonight's EastEnders
5 years ago
Ellen DeGeneres and celebrity girl gang spoofed Magic Mike and it's incredible
5 years ago
People are swooning over this elderly couple's dedication to matching outfits
5 years ago
Festival goers on the way to Electric Picnic help a thirsty cyclist well on his way
5 years ago
This girl's 18th birthday cake may be the funniest one ever
Next Page