What's the one thing that's worst than a first date?

While we're tempted to say NOTHING, we think that realising it's not actually the first time you've dated the person could be worse. 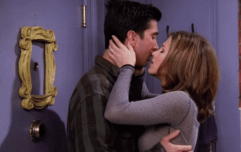 END_OF_DOCUMENT_TOKEN_TO_BE_REPLACED

That was the case for two participants of the Irish First Dates, which is currently filming at the Gibson hotel.

Yep, one of the couples who had been set up on a date, had already dated.

An insider told the Irish Sun:

“How Irish is that? It’s never happened on UK’s First Dates but Ireland being Ireland, the guy and the girl, not only knew one another but had been out on a date before."

The couple were demoted to a background couple, which we think may actually be more awkward than if it had been filmed.

Ireland is just too small - which is one of the main reasons we can't wait to tune in to the programme when it airs on RTÉ2 in the Spring.

Our unique brand of awkwardness will now be televised for all to see.

popular
16 and Pregnant star Jordan Cashmyer dies aged 26
Irish in Sydney shaken by Ashling Murphy murder
Gardaí seize two cars linked to Ashling Murphy death as they question new suspect
Here's where all the 149 tickets that won €36,687 in Saturday's Lotto were sold
A celebrity hairstylist just shared a genius hack for the perfect messy bun
Dancing on Ice professional Sean Rice dies at 49
Louise Thompson cries "20 times a week" due to PTSD following birth of son Leo
You may also like
4 days ago
Ireland AM's Elaine Crowley says she finds dating hard as she splits from partner
1 week ago
Text your ex over Christmas, yeah?
1 month ago
Fans are convinced a Selling Sunset star is dating Zac Efron
1 month ago
'Ethical non-monogamy': polyamory is in the mainstream, here's how to do it right
1 month ago
'Voice-fishing': the latest dating trend everyone's paranoid about
2 months ago
'Golden penis syndrome' might be the reason we're always getting ghosted
Next Page