If you didn't manage to catch last night's episode of I'm A Celebrity, Get Me Out Of Here you should be absolutely devastated because apparently it was the funniest, most side-splitting instalment of the show yet.

But how was it so funny? we hear you cry.

What made thousands of viewers around the UK and Ireland lose their shit and take to Twitter in manic fits of hilarity? you wail.

One might be forgiven for assuming that it had something to do with last night's Cyclone challenge where all of the remaining celebrities had to crawl up a big wet hill while things got thrown at them and they screeched in horror while desperately trying to win some stars to feed themselves.

It was that people thought Holly's top said 'penis' when it actually said 'Paris'.

Here's the top in question.

Penis? Paris? Honestly who could ever tell in this overtly PC-climate?

Just kidding, political correctness is a good thing and has very little to do with reality TV viewers literally losing their minds over their inability to read a word.

(In fairness though, if the top did say 'penis' it would have read 'penis by night' which is pretty funny, yeah.) 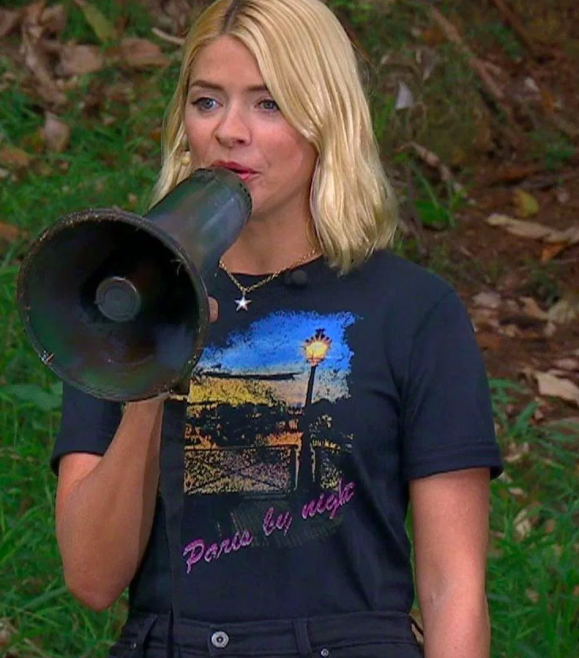 Following the mass confusion, Holly's Instagram was awash with loads of people who took it upon themselves to share many crying laughing faces due to the simply hysterical piece of clothing.

They also started fighting about whether Holly's boots are nice or not, because people clearly have very little more to do with their time.

Anyway, the I'm A Celeb final kicks off tonight - either Harry, Emily, or John will be crowned the King or Queen of the Jungle.

Exciting times, and hopefully not a penis to be seen by anyone.