WATCH: The trailer for Euphoria season 2 is finally here

We need it now.

It feels like we've been waiting forever to get a glimpse of the upcoming season of Euphoria but the wait is finally over, it's here.

The Emmy winning TV show has just dropped the first look at what's to come for the second season and it looks like we're in for a treat. 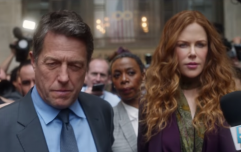 END_OF_DOCUMENT_TOKEN_TO_BE_REPLACED

Set to air in January, the sophomore season looks to be just as hectic and unpredictable as the first, with Zendaya's character Rue dancing her way through her house to Frank Sinatra’s 'Call Me Irresponsible'.

The first season saw Zendaya become the youngest person to ever win an Emmy for lead actress and has been praised by viewers and critics for its honest approach to drugs and alcohol.

The first season focused on Rue and Jules, played by Hunter Schafer, and their complicated relationship, with the last time we saw them being the holiday special showing them wishing each other a happy Christmas, post-break up.

And from the teaser that's just been released, season two is set to deal with how the teens start drifting apart from each other, with Rue's voiceover saying: "When you’re younger, everything feels so permanent. But as you get older, you begin to realize nothing is and everyone you love could drift away."

Earlier this year, the creator of the series Sam Levinson revealed he was hopeful that the second season would arrive on our screens by the end of 2021, and while that isn't happening, we won't be too far into 2022 before we get to see it.

Euphoria season two is set to air on HBO Max on January 9th, with Sky Atlantic and NOW TV expected to also show the series.

popular
Nick Cannon's 5-month-old son Zen has passed away
Woman killed in Clare crash named as Peggy Twomey, mother of Marty Morrissey
Mrs Brown's Boys star Fiona O'Carroll split from co-star husband after 15 years
Maura Higgins ends up in A&E with everyone's nightmare injury
Someone has ranked the penis size of men from all over the world
People are losing it over Lana del Rey wearing a Shein dress on the red carpet
Woman in her 90s dies after horrific road crash in Clare
You may also like
2 years ago
Chernobyl creator reveals distressing scene was 'toned down' from real life events
2 years ago
Riviera has officially been renewed for a third season
2 years ago
Game of Thrones fans ridicule show after spotting huge error in latest episode
2 years ago
All of the hidden details from the new Game of Thrones opening credits
2 years ago
Game of Thrones' Gemma Whelan teases what's next for Yara Greyjoy in season 8
2 years ago
The trailer for HBO's Chernobyl mini-series is absolutely chilling
Next Page