There are some Christmas movies that we can watch every holiday season, again and again, without fail.

From Home Alone to Die Hard (which totally is a Christmas movie) and everything in between, the festive classics just never get old. However, we'll always have a soft spot in our hearts for Elf.

The comedy, which was released 15 years ago, stars Will Ferrell as Buddy the elf, a human who was raised by Santa's helpers. 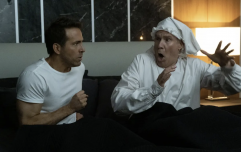 Will Ferrell is starring in a new Christmas movie... and it's with Ryan Reynolds

END_OF_DOCUMENT_TOKEN_TO_BE_REPLACED

But after he grows too big for his home, Buddy goes on an adventure to find out everything he can about his real family.

Ferrell recently spoke to Rotten Tomatoes about the film, including the iconic line he improvised and the one part of the movie that makes him cry.

And, pretty unsurprisingly, it is one of the emotional moments in the entire movie.

"That moment where Buddy is in the back of the sleigh and everyone's singing in Central Park and there's enough Christmas spirit to get it lifted off, and he's waving goodbye. 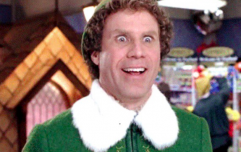 END_OF_DOCUMENT_TOKEN_TO_BE_REPLACED

The 51-year-old also revealed that one of the most memorable lines from the film, Buddy's 'Santa! I know him!' before St. Nick arrives in Gimble's, was actually an improvisation.

He added that while "the first couple of takes really took people by surprise", the line was meant to capture Buddy's infectious joy over seeing a familiar face.

"That was just my articulation of Buddy literally taking that piece of news at face value and [thinking] what would be his literal reaction.

"A man without a country in this strange land finally getting to see someone he knows really well - it would be the most jubilant reaction ever."

popular
Shawn Mendes (24) is reportedly dating Dr Jocelyne Miranda (50)
Brighten up your Christmas with these affordable festive lights, coming to Lidl next week
Irish wellness brand cancel Cork pop-up following explosion on ship full of stock
Apparently this is the best date to put up your Christmas tree
Why Are Men so Obsessed With Boobs? The Answer is Pretty Surprising...
Lauren Graham shares who she thinks Rory's baby daddy is
Natalie Imbruglia's Torn is actually a cover and the original just isn't the same
You may also like
3 years ago
Here's everything you need to know about Will Ferrell's Eurovision film
4 years ago
Will Ferrell just bought a house in Ireland and it's fancy AF
4 years ago
Will Ferrell set to star in a movie about the Eurovision and we're already buzzing
4 years ago
Will Ferrell taken to hospital after SUV 'flips' during two-car accident
5 years ago
Will Ferrell says Mariah Carey caused a 'sh*tstorm' on his movie set
5 years ago
Anchorman's original plot was supposed to be very different
Next Page