Would You Sign Up For This Netflix Dating App?

For those singletons who love a good Netflix marathon but feel the guilt for staying in on a Saturday night, this new dating app is the answer to your prayers.

My Show Mate is the app that helps you hook up with a potential love interest who shares the exact same amazing taste in TV shows that you do. 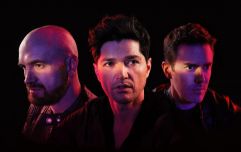 END_OF_DOCUMENT_TOKEN_TO_BE_REPLACED

Now you can find other potential love matches in your area who also think a night in bed with your laptop and jar of Nutella sounds epic. (Don’t judge, it’s our thing)

Currently being developed by Angela Manfredi, all you have to do is mark off your favourite programmes and other telly obsessive singletons in your location who match your viewing habits can have the chance to catch up.

“I want to meet a great guy with common interests. I don’t climb, I don’t bike and my idea of breaking a sweat is watching the season finale of Homeland.”

Brand new on @Kickstarter: My Show Mate. Because TV is Too Good to Watch Alone. by Angela Manfredi http://t.co/1Hp2l7b1Mg

Angela is now fundraising to get her app up and running over on Kickstarter.

Girls With Goals || Her · Ep.161: Feeling Peachy - Sharon Keegan of Peachylean on being an absolute BOSS!
popular
Woman buys 148 year old house, goes viral after finding secret passage way
Is that Seth Rogen without a beard?
Harry Styles accepts BRIT for Best British Single - with American accent
Ellen DeGeneres ending talk show after 18 seasons
9 Dublin restaurants with outdoor dining we've already booked a table for
More footage of Tristan Thompson cheating on Khloe has emerged
Little Mix pay tribute to Jesy as they make history at BRIT Awards
You may also like
3 weeks ago
Couples who post more selfies are less happy, says study
3 weeks ago
Instagram v reality: Why are we so fascinated by "normal" photos of celebrities?
1 month ago
Woman goes viral on TikTok after posting picture of wine glass without noticing reflection
1 month ago
Laura Whitmore replies to "disgusting" Instagram DM, urges people to "think before they send"
1 month ago
Instagram bans adults from messaging users who are under 18
3 months ago
Bebo, the greatest social network of all time, is returning to save us
Next Page