YES! RTÉ will be the first to air The Handmaid’s Tale season 2 outside of America

Unless a TV series is Irish or British, it's usually the case that we have to wait weeks or months to watch a new season.

Many Irish channels don't get the rights to air a show for aaaages, and of course, that's mega frustrating to us.

However, RTÉ has just announced that it will be airing season 2 of The Handmaid's Tale just a day after it airs in the US.

It will be the first broadcaster in Europe to air the second season of the acclaimed drama, with it taking to our TV screens on RTÉ2 on Thursday April 26. You will also be able to live stream it on demand through RTÉ Player.

If you haven't seen the latest trailers for the show, then you should watch them now because they are dark AF. 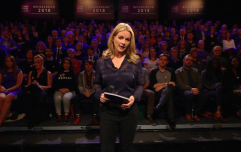 END_OF_DOCUMENT_TOKEN_TO_BE_REPLACED

After a thrilling premiere season, the show is now preparing to release an even more intense second season, and going by the new trailer we’re in for a rough ride.

"Is this what freedom looks like?" captioned the post shared by the makers of the show and we had chills watching it.

Showrunner Bruce Miller has promised that season two will be even more intense than the first and that fans should expect some terrifying twists and turns along the way.

popular
'Beard-baiting' is now apparently a dating trend - and we're all for it
10 women on the relationship deal-breakers they learned the hard way
Curtain bangs are trending - here's everything you need to know
QUIZ: How well do you really remember the first episode of Sabrina The Teenage Witch?
Rose Leslie and Kit Harington share baby news with super cute photo
QUIZ: Can you name all 32 counties in Ireland in under 4 minutes?
15 tattoo ideas you'll adore if you love the sea
You may also like
2 months ago
Follow-up to powerful documentary on Covid battle in St. James’ Hospital to air on RTÉ tonight
3 months ago
Love/Hate is back on RTÉ and we're so excited to experience it all over again
4 months ago
Normal People director Lenny Abrahamson to give online film class for RTE's Home-School Hub
5 months ago
'Suddenly, all the behaviours that you're watching feel amazing': Lenny Abrahamson on watching the Normal People TV series through the lens of the Covid-19 crisis
5 months ago
'I'm confident we've done it justice': Paul Mescal on playing Connell in the new TV version of Sally Rooney's Normal People
5 months ago
'It's a different way of watching those two characters exist': Daisy Edgar-Jones on the TV adaptation of Sally Rooney's Normal People
Next Page