Breastfeeding in public can be a difficult task.

It can be difficult for women to feed their babies in public without interfering strangers or questionable glances from weirdos. There are so many things to juggle that the last thing women expect is judgement from others.

Unfortunately, that's exactly what one Australian woman, encountered while on a Jetstar flight in Australia.

According to essentialbaby.com, mother Natalie Jane Sawyer said she was on a Jetstar flight from Brisbane to Townsville at 6am on a Monday morning and had been pumping breast milk when a crew member politely asked her to "cover up".

"I (sic) was asked by one of your flight crew if i had a cover to cover myself up because people would be coming down the aisle to go to the bathroom,

"I had a pumping bra on so no part of my boobs could be seen and a shirt covering my pumps. 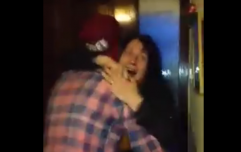 END_OF_DOCUMENT_TOKEN_TO_BE_REPLACED

"I began pumping as soon as all the passengers were seated and was almost finished pumping by the time the seat belt sign was turned off."

Sawyer said she had taken a picture of herself pumping on the plane to send to her mother to show her how proud she was of being able to pump in public, but the image ended up being used to ask Jetstar to 'retrain their staff'.

We won't be taking a Jetstar flight any time soon.

popular
QUIZ: How well do you remember 13 Going on 30?
Here are the 10 finalists for this year's Galway Races 'Virtual Best Dressed' competition
Caroline Foran's tips for first-time interior design, when you haven't got a clue where to start
Staycation: 5 Irish heritage sites we're absolutely hitting up this summer - and they're all free
Back on the BBQ: Here's a recipe for cooking your pancakes... outside
Bleach stain struggles: Here's how to save your clothes from ruin
Danielle Gingell crowned the winner of this year's Galway Races 'Virtual Best Dressed' competition
You may also like
2 months ago
Australian wildlife park welcomes first baby koala following bushfires
6 months ago
Lush has just launched a koala shaped soap to raise money for the Australian bush fires
6 months ago
Irish artist, Audrey Hamilton, has raised €20,000 to donate to the Australia bushfire fund
6 months ago
A koala hospital has opened up in a primary school near Adelaide, Australia
6 months ago
Wombats are really, very big and the internet simply refuses to believe it
6 months ago
The Irwin family has helped over 90,000 animals during Australian bush fires
Next Page