The Cambridges were out 'n' about in London on Monday night - looking lovely in formal attire.

They weren't quite out on the lash: she's pregnant with their third child, for one, while the soiree in question was actually being held in honour of his grandparents.

Yes, the Queen and Prince Philip are now married for an incredible 70 years... so a load of royal types gathered at Buckingham Palace to toast the happy couple - who are both now in their 90s. 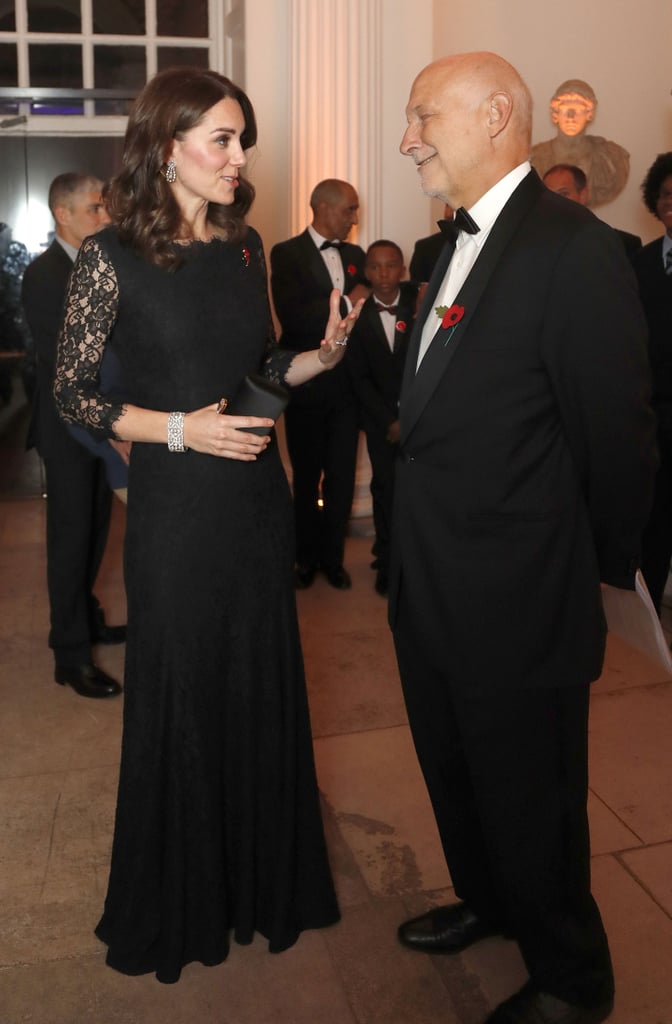 Kate a couple of weeks ago in the same dress

Duchess Kate wore an €885 Diane Von Furstenberg full-length black lace dress (she wore the same number to The Anna Freud Gala Dinner), but it was her choice of jewellery that really turned heads.

To mark The Queen and The Duke of Edinburgh's 70th Wedding Anniversary, new photographic portraits have been released worldwide. pic.twitter.com/Jl6elndhFe

Opting for a stunning set of four-string pearls complete with an elaborate brooch clasp. The piece belongs to the Queen herself and the same choker was previously borrowed by Princess Diana, who wore it during the Eighties.

Wills and Kate arrived with Prince Harry - with both lads decked out in black-tie.

Others in attendance included Prince Charles and the Duchess of Cornwall, Prince Andrew, Prince Edward, and Princess Anne, as well as the Queen's grandchildren the Princesses Beatrice and Eugenie, and Peter Phillips and Zara Tindall.

popular
Miracle baby on the way for bride whose partner died on wedding day
Why Are Men so Obsessed With Boobs? The Answer is Pretty Surprising...
Johnny Depp confirms he will be back as Grindelwald in Fantastic Beasts 3
Someone has ranked the penis size of men from all over the world
How to INSTANTLY unblock your stuffy nose (we swear this works)
Here's what happens on every day of your menstrual cycle (roughly)
Here's the average age people lose their virginity around the world
You may also like
2 weeks ago
Prince William and Kate moving family out of London for more 'privacy'
3 weeks ago
“They’d never force him to go”: Kate and William to decide to send Prince George to boarding school or not
1 month ago
Kim Kardashian addresses "nasty" Kate Middleton comparisons while pregnant
2 months ago
“Mummy, please stop taking photographs” - Prince George turns 8 years old today
2 months ago
Kate Middleton confesses "mum guilt" around saying goodbye to her children
2 months ago
Prince George to be kept out of limelight after "barrage of social media abuse"
Next Page