Former child star Charlotte Church has told fans that she is pregnant with her third child.

The 31-year-old was performing on-stage with her Pop Dungeon Band at the Birmingham Pride festival on Sunday evening when she made the announcement.

She has happy to put her hand tenderly on her stomach as she performed and certainly seemed have a small baby bump - though Charlotte didn't reveal when she's due.

She's been with musician Jonathan Powell for seven years and has previously admitted that more children are on the cards for the pair.

Charlotte and Gavin dated for more than five years from 2005-2010 and were at one stage one of the highest-profile young couples of the tabloid-era. 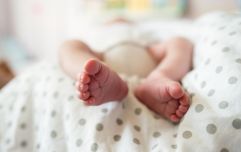 END_OF_DOCUMENT_TOKEN_TO_BE_REPLACED

The one-time classical singer - who also went on to have a pop career as an adult - revealed last year that she has chosen to tutor her two children at home rather than send them to school.

She stated in an interview: "I try not to talk about that too much.

"I try to keep them out of it a bit so that in future years when they’re on the internet they’re not like 'people say we were weird because we were home-schooled'."