It's her third child - so she's had practice (and form!) when it comes to dressing for a high-profile christening.

And the Duchess Of Cambridge certainly didn't disappoint on Monday for Prince Louis's big moment.

The 36-year-old wore a white dress by Alexander McQueen - one of her favourite labels and the same designer that created her breathtaking 2011 wedding gown.

Members of the Royal Family arrive at St James's Palace for the christening of Prince Louis. pic.twitter.com/3pDk4D898C 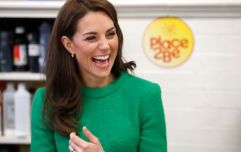 END_OF_DOCUMENT_TOKEN_TO_BE_REPLACED

Kate furthermore once again opted for white; the same shade she wore for both George and Charlotte's christenings in 2013 and 2015 respectively.

Her headpiece was also fab; it was created by Jane Taylor.

Meanwhile, Meghan went for an off-green Ralph Lauren along with a hat by Stephen Jones. The Duchess of Cornwall chose a Fiona Clare dress and a Locke hat.

The godparents arrive along with the Middleton family for Prince Louis’s christening pic.twitter.com/3uZvWw54ZB

A post shared by Kate Middleton (@katetheduchessofcambridge) on Jul 9, 2018 at 8:04am PDT

The Archbishop of Canterbury was on hand to baptise 11-week-old Prince Louis on Monday.

A statement on Monday announced the godparents as: