Update: Toddler Who 'Woke Up' During Her Own Funeral Sadly Passes Away

**Update: Following the video going viral, media reports have confirmed that the child has since sadly passed away

Be warned, this is an emotional one.

Family and friends were shocked at the funeral of a three-year-old toddler this weekend, when the child woke up during the ceremony. 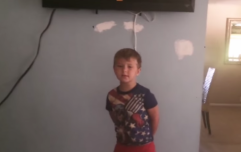 END_OF_DOCUMENT_TOKEN_TO_BE_REPLACED

Mourners were in disbelief at the ceremony in Aurora, Zamboanga del Sur in the Philippines, as the child was seen waking up and moving as the priest was preparing to administer the last sacrament.

Caught on camera, the child who had been pronounced dead just 24 hours earlier came into full consciousness during the ceremony at 1.00pm on Saturday. Locals are claiming it was a miracle, with shocked onlookers posting the video to YouTube.

The young girl was taken away by family members while the priest blessed the family and friends at the church scene.

popular
Sarah Jessica Parker offers to help out at Dublin restaurant
Vogue Williams slams man who refused to swap seats with her on plane
Three children among 12 killed in massive European storm
This is the exact date the weather will get warm again
New Zealand family find two bodies in second hand suitcases
Crown Paints advert receives 200 complaints over 'misogyny' and 'everyday sexism'
Man charged with the murder of Clare man Thomas O'Halloran
You may also like
2 months ago
Toddler drowns in swimming pool while on holidays in Costa Blanca
3 months ago
Man saves 3-year-old girl's life as she falls from eighth floor window
10 months ago
Mum shares horrifying story of toddler filming her in the shower on Instagram Live
10 months ago
WATCH: Irish toddler called a "young Reese Witherspoon" by Diane Keaton
3 years ago
A two-year-old girl has been found in a house in Cork with life threatening injuries
3 years ago
This little Irish girl swearing about her sore fingers is absolutely gas
Next Page