Bounty bars to disappear from Celebrations tubs this Christmas

Turns out more than a third of people never touch the sweet.

Bounty bars are set to be banished from Celebrations tubs this Christmas in a move that is likely to divide opinion.

The mini chocolate bar will be removed from certain tubs in a trial after research found that 39% of consumers never go near the coconut-flavoured treats. 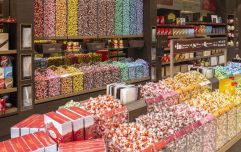 END_OF_DOCUMENT_TOKEN_TO_BE_REPLACED

Customers at select Tesco Christmas Market sites will be able to exchange tubs bought in-store that day for a new "No Bounty" alternative until 18 December.

As of now, it appears that the trial is a UK exclusive, so hopefully Irish Bounty lovers won't be devastated come December.

The limited-edition tubs will include additional Mars, Snickers, Milky Way, Galaxy and Maltesers sweets to make up for the missing Bounty bars.

Mars Wrigley said its own research of 2,000 UK residents aged between 18 and 65 suggested that 18% would feel irritated to find only Bounty bars were left in the tub, while 58% believed it would lead to a family argument.

END_OF_DOCUMENT_TOKEN_TO_BE_REPLACED

One in four consumers want the bars gone for good, and just over a fifth (22%) say they like Bounty the least of all the tub's options.

Some 28% were of the opinion that coconut had no place in a chocolate bar at all.

The move to remove the chocolate bar follows a Bounty Return Scheme last year, in which Bounty haters were permitted to return their unwanted chocolates and swap them for Maltesers after the Christmas period.

Celebrations senior brand manager Emily Owen said: "You don't know what you've got until it's gone. And to those loyal – and secret – Bounty lovers out there, there's still a chance they'll make a return after the trial."

The trial is rolling out across 40 Tesco Christmas Market locations, but it has divided opinions. Here's a pick of what people have had to say:

Good morning to everyone except the person who decided to remove Bounty’s from a tub of Celebrations.

Why would you remove the Bounty when the disgusting and pointless Milky Way exists? What self respecting person resorts to eating the Milky Ways? I feel personally attacked https://t.co/w8tsIsjWto

Sure, everyone’s problem was Bounty and not the meaningless of Mars, of which there will be more now.

I will not stand for people cancelling Bounty off the shelf’s, or God forbid the rare dark chocolate Bounty that when refrigerated is perfection. https://t.co/kD4zp1Bf0P

I find it hard to respect Bounty haters https://t.co/X3MeToxdWJ

popular
He may be a politician, but Leo Varadkar's personal life is none of our business
Fans are feeling seriously sorry for Molly Mae Hague after resurfaced interview
Kelsey Parker: "People think I should be walking around wearing my black veil"
"I slept with your fella": Vogue speaks out about ex's cheating
Woman hit by rollercoaster wakes from coma after two months
Parents told to stop buying selection boxes for kids- here's why
Dundalk restaurant offer free Christmas dinner to those in need for third year running
You may also like
2 days ago
Expecting a baby in December? These are the top Christmas-inspired baby names
2 days ago
Revealed: The correct date you should be putting up the Christmas tree
3 days ago
Parents told to stop buying selection boxes for kids- here's why
4 days ago
Stevie Nicks leads tributes following the death of Christine McVie
6 days ago
Here are the odds that it will actually snow on Christmas day
1 week ago
Rejoice - Christmas FM is back on the airwaves today
Next Page