This is the best news ever.

According to Lovin' Dublin the popular burger restaurant, which originated in New York, will be coming to Dublin this Autumn. They've also revealed the location, which will be Dundrum Shopping Centre, down near the Wagamama's in the food section, to be more exact. 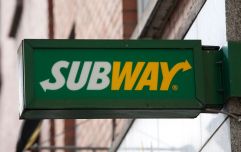 Fan of Subway? Here's what you should NEVER order, according to one of their employees

END_OF_DOCUMENT_TOKEN_TO_BE_REPLACED

A source told them, "Signed, sealed and delivered last week."

Their first Irish store opened in Belfast last year and has gone down a treat with people. It was announced months ago that they would be opening a second branch in Dublin and got people's hopes up but then nothing transpired about it leaving people wondering if it ever was going to materialise.

Anyone who has been to the New York branch, or the ones in London or Dubai, will agree that it has the tastiest burgers around. Not to mind their milkshakes with pieces of bacon - don't knock it 'til you try it.

popular
You stars Victoria Pedretti and Dylan Arnold spark romance rumours
Someone has ranked the penis size of men from all over the world
Why Are Men so Obsessed With Boobs? The Answer is Pretty Surprising...
The most popular baby names in Ireland have been released in Statistical Yearbook 2021
This is how much 91-year-old Queen Elizabeth drinks every day
So are we dating?... 10 signs it's time to define your relationship
Science says this is how many dates you have to go on before you find 'The One'
You may also like
5 years ago
Only real 'The Devil Wears Prada' fans can get over 10/13 right in this quiz
5 years ago
Tonight's return of The Late Late Show went down a treat with viewers
5 years ago
People are swooning over Solange Knowles' latest dress
5 years ago
Fans have been left REELING at the outcome of tonight's EastEnders
5 years ago
Ellen DeGeneres and celebrity girl gang spoofed Magic Mike and it's incredible
5 years ago
People are swooning over this elderly couple's dedication to matching outfits
Next Page