Long before she was a royal, Meghan Markle was sharing some of her secrets in the kitchen.

During an interview with Delish, she was sharing what kind of things she normally eats in a day.

Most of it was standard enough: her favourite dessert, her guilty pleasure, and her secret to glowing skin (almonds, apparently).

What was particularly eye-catching, though, was her trick to making pasta sauce - or, as she called it, a "filthy, sexy mush".

While it may not be the most appetising description, she kindly shared how to actually make it...and, well, it sounds amazing.

The recipe starts off easily enough, chopping up some onions and cooking them in oil.

Then add chopped zucchini and bouillon cubes, before letting it cook down for four hours.

So, you know, probably best to start the prep on this one early.

But, according to Meghan, the slow-cooking process ends up breaking down the zucchini and turning it into a super creamy sauce.

"The sauce gets so creamy, you'd swear there's tons of butter and oil in it, but it's just zucchini, water and a little bouillon." 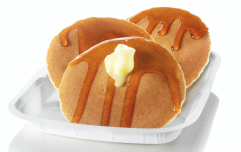 END_OF_DOCUMENT_TOKEN_TO_BE_REPLACED

She tosses the sauce with the pasta, seasoning it with salt, pepper and some lemon juice.

To top it all off, she uses parmesan and red pepper flakes.

After you get through the recipe, you end up with what the Duchess for Sussex calls a 'zucchini bolognese' - or, at least, a vegetable-based version of it.

Ready to give it all a shot? You can check out the full recipe here.


popular
The comfy €42 M&S boots we're going to be living in all spring
Le Creuset has launched a millennial pink collection, and we need it all tbh
The floral Penneys dress that will instantly update your spring wardrobe
Why you shouldn't put your address on your luggage when going on holiday
Netflix's Babies documentary is making quite the impression online
No chemical peel needed: 7 easy ways to achieve the glowing skin of your dreams
Summer is coming, and we'll be living in these adorable €11 denim shorts from Penneys
You may also like
21 hours ago
Here's a Japanese soufflé pancakes recipe to try for Pancake Tuesday
1 day ago
Frank's RedHot Sauce is now selling Bloody Marys in a can and sorry, imagine
4 days ago
Tayto have launched two brand new crisp flavours for you to get stuck into
1 week ago
9 last minute Galentine's treats in Dublin, Cork, and Galway - for the day that's in it
1 week ago
A new restaurant has opened in Dublin and their low-carb pizza is the business
2 weeks ago
The beloved Friends bottomless brunch is finally kicking off in Dublin next month
Next Page