Brought to you by Aiken Promotions

A show unlike any other!

Riverdance was Eurovision's interval act and it turned out to be a performance that gave millions of people a new and exciting glimpse of the future of Irish dance.

Now it's your chance to join that number (and those famous names) and see Riverdance - 25th Anniversary Show LIVE at the 3Arena Dublin on Gala Night, February 9, 2020.

All you need to do to be in with a chance to win two tickets (worth €76.25 each), fill in our little form below and tell us where you were when you first saw Riverdance!

Maybe you saw it in Dublin in 1995 at the Point, or in Paris, or London or even China! Maybe you were among the first in the US to see Riverdance live, as it burst onto the stage of Radio City Music Hall or maybe you have never seen it live and your first time was on TV.

Wherever it was, let us know and be in with a chance to see it LIVE on February 9, 2020, when Riverdance - 25th Anniversary Show will premiere at the exact same spot where it all began 25 years ago. 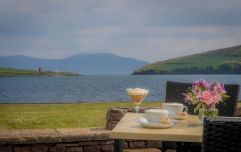 It's staycation time! WIN a two-night stay and dinner in a Select Hotel of your choice

END_OF_DOCUMENT_TOKEN_TO_BE_REPLACED

It's time for Riverdance live — the original! And 25 years on, it's still utterly spectacular.

If you cannot see the form or the submit button, please click here.

Brought to you by Aiken Promotions

popular
QUIZ: How well do you remember 13 Going on 30?
QUIZ: How well do you know The Young Offenders?
Staycation: 5 Irish heritage sites we're absolutely hitting up this summer - and they're all free
12 of the best podcasts we listened to during lockdown
Spotted at Penneys: Two cruelty-free dupes for popular makeup brands
Caroline Foran's tips for first-time interior design, when you haven't got a clue where to start
Here's what happens on every day of your menstrual cycle (roughly)
You may also like
6 days ago
Love that natural energy: The Naked Collective is the type of clean, healthy, and vegan company that we need right now
2 weeks ago
Luxury Wedding Competitions is giving you the chance to WIN your dream wedding for just €20
2 weeks ago
Make the most of summer: 5 ways to host the perfect social-distancing summer gathering
3 weeks ago
5 absolute essentials for when you're having the gals over for a summer evening soirée
1 month ago
It's BBQ time! This shrimp and grits dish is the perfect summer meal
1 month ago
8 out of 10 married couples are owed tax back, are you one of them?
Next Page