It started as just a spot on her nose.

Married At First Sight Australia star Lauren Huntriss recently revealed that she had to undergo surgery to remove skin cancer when she was just 27.

Huntriss says that it all started out as a spot that started bleeding and that she is so glad that she got it checked out.

The 33-year-old says that she first noticed the spot in 2015 and that no matter what she did it wouldn't go away.

Eventually she went to the doctor's to get it seen to and that was when she received some shocking news.

"On observation the dermatologist noticed this spot on my nose. He said it looked suspicious so took a biopsy.

Huntriss opted for surgery and a skin graft (as the surgery had made a large hole in her nose) and she feels lucky that she caught the cancer when she did. 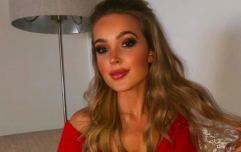 END_OF_DOCUMENT_TOKEN_TO_BE_REPLACED

She went on to say in the post that she feels incredibly lucky that she spotted the blemish at all and that she might not be here today if she hadn't.

Huntriss who regularly talks about skin care on her social media platforms hopes that by telling her story more young people will be wary of skin cancer and to get anything that looks suspicious checked out immediately.

Huntriss is most known to many for her appearance on Married At First Sight in 2019 when she was paired with videographer Matthew Bennett.

However the couple did not remain married for long when Bennett said during a dinner party that he wasn't attracted to Huntriss.

On a recent post she made about her appearance on the show Huntriss wrote;

"This experiment was 2 years ago for me and I have well and truly moved on and grown from my experience. "

popular
Couple, both 100, die holding hands just hours apart after being married for almost 80 years
Gwen Stefani reportedly pregnant with baby number four
Vogue Williams deems David Beckham a "sh*tebag" over World Cup deal
Here are our top picks from this week's Lidl Toy Event
He may be a politician, but Leo Varadkar's personal life is none of our business
Tom Parker's wife suffers more heartbreak just nine months after husband's death
Kourtney Kardashian gives huge update about stopping her IVF journey 10 months on
You may also like
4 months ago
Deborah Meaden urges fans to be vigilant for signs of skin cancer
4 months ago
HSE issues skin cancer warning as temperatures set to boil over
4 months ago
Coronation Street's Sue Nicholls diagnosed with cancer after fans' warning
10 months ago
Faye Winter opens up about cancer scare after leaving Love Island villa
1 year ago
Experts warn that skin cancer will treble over the next 20 years
4 years ago
Woman's skin cancer selfie led to increase in prevention searches
Next Page