Vicky Phelan shares symptoms and urges women to get checked

Vicky spoke about the importance of getting any symptoms checked out.

Irish cervical cancer campaigner Vicky Phelan has been documenting her experience with cancer since her diagnosis.

Recently, Phelan spoke about how important it is for women to get checked regularly. 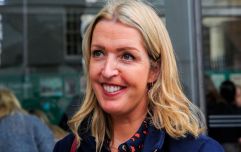 END_OF_DOCUMENT_TOKEN_TO_BE_REPLACED

During an Instagram live video with SocialMindIreland, Vicky explained how she noticed spotting in between her periods before she was diagnosed.

"I was very lucky that I had regular periods," she said. "So by the time I started bleeding in-between my periods, I knew that something was wrong."

Vicky added that as well as the spotting, she noticed that the colour of the blood was different.

"Menstrual blood is dark blood," she explained. "I knew something was amiss because there was blood that I was seeing, kind of spotting on my knickers, wasn't dark blood. It was pink, kind of pinkish red."

Vicky went on to explain that she bled "profusely" after having sex with her husband. It transpired that the sex had cause a tumour to shed.

END_OF_DOCUMENT_TOKEN_TO_BE_REPLACED

"I bled profusely after sex with my husband, and it was bright red. It was like a murder scene, there's no other way to describe it.

"It frightened the living daylights out of the two of us but I just thought, at that stage, 'Oh Jesus, this is serious. There's something wrong here. You're like, 'This is not normal.'"

Vicky then urged women to get themselves a smear, and not to delay in getting any symptoms checked out.

"Is that worth risking getting cancer like this?" she asked. "No, it isn't. If you're bleeding at that stage, that's usually a symptom of advanced cancer  - it was with me."

After months away from her family on a cancer trial in the United States, Vicky is back home in Ireland for the summer.

popular
Apparantly, there is one colour you should never wear at a job interview
Friends Star James Michael Tyler Files For Divorce
Late Late Show viewers are not happy with Ryan's questions for Billy Connolly
New study finds link between fizzy drinks and infertility
Friends actor James Michael Tyler has died, aged 59
10 items from Zara for the perfect autumn capsule wardrobe
9 of the best horror movies on Netflix this Halloween
You may also like
1 week ago
Portrait of HPV vaccine campaigner Laura Brennan unveiled at Royal College of Physicians
1 month ago
More than half of people think HPV is a lot rarer than it is
1 month ago
Vicky Phelan may leave trial and return home following scan results
2 months ago
Lynsey Bennett concerned upcoming scan may leave her without treatment options
3 months ago
CervicalCheck see 180 samples expire in capacity issue
3 months ago
Vicky Phelan is finally home after 6 months away from her kids
Next Page