10 Things all past and present Gaelic Football Gals will know

Gaelic football was my LIFE during my teens.

I spent my time running laps and doing solos like a mad yoke and it made me ambitious, determined and fit as heck.

G.A.A is truly a magical thing in Ireland, ensuring craic and giggles along the way.Gaelic football is one of the most exciting and fast-paced sports to watch and I love it, so I've written a list of all the things any GAA gal will know.

Or GAA-L if you will.

1.Oranges at half-time were BAE.

The referee blowing the whistle at half-time was always a serious relief, it gave you the chance to actually BREATHE for the first time in about 20 minutes.

You all scuttle your way over across to your trainer and team-mates and what do you see? A GLORIOUS lunchbox of juicy ripe oranges.

A juicy half orange was the perfect treat to get your sugar levels up a bit and give you a spring in your step. If it was a REALLY big game, the half-time treats were luxurious as HECK - the bounty could include Lucozade and Cadbury's Dairy Milk.

2. Your Mam transforms into an unrecognisable creature on the sideline...

You're on the pitch, dodging tackles and soloing the ball like there's no tomorrow.

"DRIVE IT! DRRRRRIIIIIIIIVE THE BALL THERE NOW"

You stop dead in your tracks and look. Who on earth is screaming like a harpy? It's your mother.

END_OF_DOCUMENT_TOKEN_TO_BE_REPLACED

Yes, while there's only so many phenomena in the world, GAA Mam is very much a real thing.

She's the woman on the sideline wearing a woollen hat with the team crest on it and a waterproof jacket and wellies.

She spends the entirety of the match purple-faced from screaming extremities at everyone on the pitch, veins rising out of her neck and forehead and is known to holler things like:

3. The banter while car-sharing is just the BEST.

Going to different destinations to play an away match meant sharing cars with your team-mate's parents which was just the bee's knees.

It was a bonding experience, bitching about the opposition/your team-mates/your trainer/referee. It was a cathartic experience knowing others felt the same as you.

After the matches, the car would stink to high heaven from the wet socks and boots but it only added to the atmosphere.

Getting frustrated while playing a match is inextricably linked with a little swear word or two - why were the referees always so strict?

5. The bibs at training were always a little... rank.

Because of the community nature of G.A.A clubs, it was sometimes hard to wash all the equipment in time for training.

When playing practise matches, sometimes the bibs would smell like old wet socks or even have a bit of grass on them. Nice.

6. Washing the bag of dirty jerseys took an absolute AGE.

25 jerseys took nearly 3 or 4 washes, on top of your family's own washing.

My mam used to PULVERISE me for bringing them home.

7. Falling over during the summer months used to skin the LEGS off you.

The hard muddy ground on the pitch meant falling over cut your legs to pieces.

Even a small graze was bitterly sore, bruising and sometimes bleeding at the same time. Ouch.

8. Cúl Camps were the best craic ever. 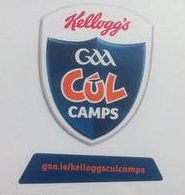 The GAA Summer camps were the highlight of the school holidays. They sometimes ran weeklong camps during the Easter break too.

9. The amount of free shit you'd get from playing on the county team was TOTALLY worth it.

Gym bags, socks, shorts, jackets, a plethora of gear was on tic when you made the county team.

Not to mention the free food and drink you'd get after matches.

10. Making the newspaper after a huge win made you feel like a regular celeb.

Local newspapers are heavily invested in sports and talent, and having your picture or name in the paper after scoring a goal or point ensured your ego would be nice and healthy.

Also something to boast about in front of your siblings as your picture rested on the fridge.

popular
Shirley Ballas books breast exam after Strictly viewers spot lump
Hollywood couple Joe Manganiello and Sofia Vergara seen enjoying a Cork chipper
Aisling Bea is reportedly dating a leading Hollywood man
You can now apply for tickets to the Late, Late Toy Show
You can now get paid to eat wine and cheese for Christmas
You can now live in the iconic house from Sabrina The Teenage Witch
Irish TikTokers are telling their dads they paid €50 for 'premium air' in their tyres
You may also like
4 days ago
Olympian and world champion runner Agnes Jebet Tirop found dead in home
1 month ago
Katie Taylor reigns supreme after defending lightweight title at Leeds
1 month ago
Ellen Keane wins gold in 100m breaststroke at Paralympics
1 month ago
Women's Afghan football team evacuated safely from Kabul
2 months ago
Handball chiefs urged to resign over 'blatant sexism' of bikini bottoms rule
2 months ago
Kellie Harrington proposed for Dublin's Freedom of the City after phenomenal win
Next Page