Five years ago, a drunk 17-year-old lost a bet and registered to have his name changed. Unfortunately for him, his name was registered and went live today.

The 22-year-old is now called "Full Metal Havok More Sexy N Intelligent Than Spock And All The Superheroes Combined With Frostnova"- a name that his equally drunk friends came up with.

Spock may not approve but a spokesman for the Department of Internal Affairs births, deaths and marriages section, said the name change was registered in March 2010. Frostnova only found out recently when he went to renew his passport. 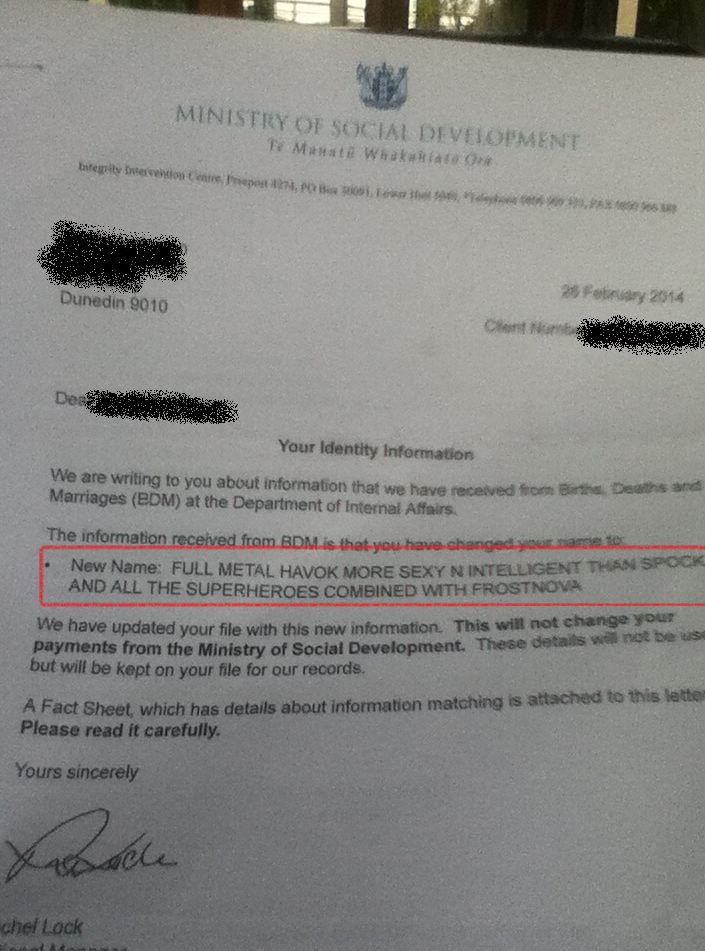 END_OF_DOCUMENT_TOKEN_TO_BE_REPLACED

The name met legal criteria and the applicant had paid the fee of €77 and completed the form "under the rules."

Rules are that the name wouldn't cause offence to a reasonable person, isn't unreasonably long, doesn't include numbers or symbols, or is without adequate justification include or resembles an official title or rank, and is less than or equal to 100-characters long.

He got through ALL of that.

He will now have to change the name on his driving licence and other official documents.

Girls With Goals || Her · Ep.151: 'A Story Shared' - Aoife P. Rafter on blogging during a pandemic and living with CF
popular
QUIZ: How well do you remember The Princess Diaries?
Ross was never meant to say Rachel's name at the altar, Friends writer reveals
'I feel betrayed': Curtis Pritchard on Maura Higgins and Chris Taylor's relationship
QUIZ: Can you complete these iconic Girls Aloud lyrics?
All the series and movies you need to see before they leave Netflix in December
'There aren't any plans': Ruth Jones denies rumours that Gavin and Stacey is returning
You may also like
3 days ago
David Attenborough quits Instagram just two months after joining
7 months ago
No more bad news: Just how beneficial is it to get off the grid during #Covid-19?
9 months ago
Opinion: Did we all play a role in Caroline Flack's death?
10 months ago
Hailey Bieber opens up about social media cruelty in emotional Instagram post
11 months ago
80 per cent of people believe social media impacts hiring decisions, study finds
1 year ago
Twitter to remove inactive accounts and free up usernames in December
Next Page