A man and woman have died after falling from a cliff at Cabo Da Roca in Portugal while taking selfies.

The couple from Poland were travelling with their children when the incident occurred on Saturday.

According to reports, the pair passed security barriers that are in place to keep tourists from the Lisbon cliff edge and slipped as they posed for a photograph. 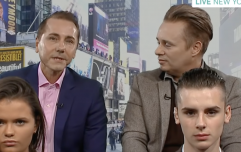 END_OF_DOCUMENT_TOKEN_TO_BE_REPLACED

Cabo de Roca is a popular attraction amongst tourist as it is the most western point of Europe and looks out over the Atlantic Ocean.

On Sunday, a rescue team discovered the Polish couple that had been residing in the country for the last number of years following a search that had to be abandoned on the Saturday due to adverse weather conditions.

The children, aged 5 and 6, are now in the care of Polish diplomats and seeing psychologists.

popular
A documentary about two Irish boys who skipped school to go to New York is coming soon
Ben Foden explains why he called Rachel Stevens "sexiest woman alive"
And Just Like That... episode 8: Nobody saw this one coming
People are only realising Kendall Jenner and Gigi Hadid are related and the reactions are gas
Special mass to be held for Urantsetseg Tserendorj's anniversary
These are the top baby names for 2022
Here are all the Instagram accounts of the stars of Netflix's Cheer
You may also like
1 year ago
The duvet that has a hot and cold setting so you can avoid nightly fights with your partner
2 years ago
WIN a luxurious spa trip to the Galgorm Resort for you and a plus one
2 years ago
Calling all brides-to-be! WIN a weekend stay at the Talbot Suites to scope out wedding haven Newbay House
2 years ago
Couple who 'don't want jobs' ask strangers to pay for them to travel the world
2 years ago
41 percent of Irish women believe this is the absolute worst present to receive on Valentine's Day
3 years ago
Afraid your partner isn't 'the one'? Chances are those thoughts are ruining your relationship
Next Page