So much for honest feedback...

A British couple claim they have been fined £100 by a Blackpool establishment after they left a bad review on Trip Advisor.

Tony and Jan Jenkinson left their feedback in August after spending a night at the Broadway Hotel in the seaside town.

END_OF_DOCUMENT_TOKEN_TO_BE_REPLACED

After posting an unimpressed review of the site online, the couple found an additional £100 had been charged to their credit card. The hotel has claimed it is their "policy" to charge for bad reviews.

Booking documents offered to visitors on check-in include the following passage:

"Despite the fact that repeat customers and couples love our hotel, your friends and family may not.

"For every bad review left on any website, the group organiser will be charged a maximum £100 per review."

END_OF_DOCUMENT_TOKEN_TO_BE_REPLACED

Tony's review, which is still posted on Trip Advisor, reads:

We chose this hotel because it had 'ample parking' , car park was full so had to park across the road at another hotel.
Couldn't believe the state of the room. The hot tap didn't work, when we reported it we were told they knew about it and it would be fixed in the morning (we were only there for one night.) The drawer fronts fell off when we opened the chest of drawers. Again, they knew about this and it was supposed to be dealt with in the morning. The kettle wouldn't work, were told you had to switch on the socket it was plugged into, also switch on another socket to make it work. This was because the whole place was rewired wrongly according to the member of staff who dealt with us, and they couldn't afford to have it put right. There were instructions on how to make a phone call, we would have had a job as there was no phone!! The wallpaper was peeling off the walls, the carpet was thin, dirty and stained. The bed was something else, it must have come out of the ark, the base was all scuffed and dirty and the springs in the mattress attacked you in the night. The curtains were tattered and filthy, there were polystyrene tiles on the ceiling which are a fire hazard.
BREAKFAST... This was a joke and consisted of 1/2 cooked rasher of bacon, 1 'plastic' sausage, 1 egg, 1 hash brown and a spoonful of beans!! Oh, I nearly forgot, 2 slices of toast each, but no marmalade to put on them. Weak tea and coffee. YUMMY!!
This place should be shut down, I don't know if they are ever inspected, but if so, I don't know how this place has passed!!
If you are offered this place to stay for a fortnight for 10p, you are being robbed!!
STAY AWAY!!!! [SIC] 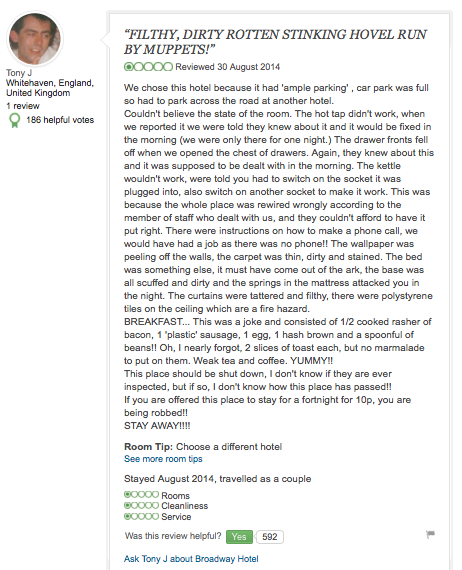 popular
James Arthur says his relationship with this celeb made him a sex addict
Wagatha Christie: Rebekah Vardy storms out of court just 30 minutes into final day
Fashion house Dolce & Gabbana is 'sponsoring' Kourtney and Travis' Italian wedding
Rebel Wilson claims male co-star sexually harrassed her
Why Are Men so Obsessed With Boobs? The Answer is Pretty Surprising...
This is the easiest way to determine you may have VIKING heritage
Did You Know This Is Blake Lively’s Real Name?
You may also like
15 hours ago
3 packing hacks to ensure you never get caught for excess baggage again
1 week ago
Europe to drop mandatory mask rule for air travel next week
2 weeks ago
You can now book to stay at the actual Moulin Rouge windmill on Airbnb
2 weeks ago
New staff making a "valuable difference" as wait times at Dublin Airport improve ahead of busy summer
2 weeks ago
An ASMR experience is coming to London this month
3 weeks ago
Australia looks to tempt Irish working holidaymakers with €10 flights Down Under
Next Page