Curly-Haired Girls Have Finally Got Their Own Emoji

Emojis have really upped their game recently when it comes to representation.

Taco-lovers - represented. Unicorns - can I get a hell yeah? We've even had all sorts of weird and wonderful genitalia get little cartoon counterparts.

It seemed curly-haired beauties were the only section of society NOT represented.

According to the beauty brand, more and more women are ditching straighteners and embracing their natural curls, and it's time for the techies to take note.

They took matters into their own hands as part of their Love Your Curls mission, and rolled our their own set of spiral sistas.

Sali Tagliamonte, Dove Language Expert and Professor of Linguistics at University of Toronto explains: “Emojis are a language of pictures, so when people use that language, they want a symbol that offers them the choice of their individual image, style, or personality.

#LoveYourCurls my hair looks like a commercial after a day at the beach pic.twitter.com/JVwtJC9xFy 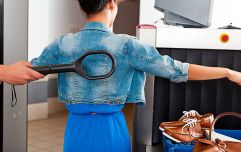 The bizarre thing you should never wear going to the airport

END_OF_DOCUMENT_TOKEN_TO_BE_REPLACED

The curly-haired emoji keyboard developed with Snaps is available for free on the Apple App Store or Google Play.

It has 27 curly hair designs with adjustible skin tone and hair color. With 131 variations, you are SURE to be able to create your own little doppelganger. Also,if you tweet #LoveYourCurls on Twitter, a curly haired emoji will appear.

popular
Miracle baby on the way for bride whose partner died on wedding day
Tributes pour in for 28-year-old primary school teacher killed in London
Johnny Depp confirms he will be back as Grindelwald in Fantastic Beasts 3
Why Are Men so Obsessed With Boobs? The Answer is Pretty Surprising...
Here's the average age people lose their virginity around the world
You could be shopping in an Aldi store with no checkouts in Ireland in the near future
So are we dating?... 10 signs it's time to define your relationship
You may also like
1 week ago
Toasted marshmallow hair is making us all want to go blonde right now
2 weeks ago
Dry shampoo is a life-saver, but are you actually using yours correctly?
2 weeks ago
Olaplex is officially launching a skincare range and we're already sold
3 weeks ago
"Everyone and anyone can wear wigs": Meet the Irish Black-owned business featured on Love Island
1 month ago
This cold brew brunette is the winter hair trend you need to get behind
1 month ago
This TikTok video finally showed me how to get the perfect messy top knot every time
Next Page