We just want to hug him.

David Attenborough's latest series, Dynasties has been another big hit so far. In particular, last week's episode made headlines when crew members took the highly unusual decision to intervene in a situation when filming Emperor Penguins and their chicks in Antartica.

The birds, all carrying chicks on their feet, had fallen over the edge of a ravine in a white-out and faced starving to death with their young or abandoning them.

In an attempt to help the penguins escape, the crew built a ramp out of the snow and the penguins used it to make their exit. Thankfully, the animals seized the opportunity and made it to safety.

In an unprecedented move, the crew decided to act. They dug a shallow ramp in the hope that at least some of the penguins would use it to save themselves ?#Dynasties pic.twitter.com/yRuoEGPDCk

It was a really poignant moment on screen, watching the animals survive as a result of the crew's intervention and apparently we weren't the only ones tearing up on the sofa.

"I've never cried while filming, but I suppose I cry more easily nowadays. Well, tears don’t pour down my cheeks, but I blinked hard on November 11." 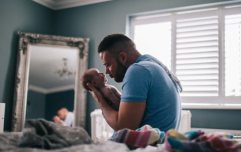 END_OF_DOCUMENT_TOKEN_TO_BE_REPLACED

The ninety-two-year-old said that while you have to be very careful of intervening in the animal kingdom, he approved of the crew's decision to do so in that particular instance.

We can't wait for next Sunday's episode which will centre on a pride of lions. It airs on BBC One at 8pm.

popular
Baby found unattended in pram in Dublin, Gardaí reveal
Joanna Cooper heartbroken after her mum is diagnosed with dementia
Love Island first look: The Hideaway is open tonight as Ron has something to tell Lana
Toddler tragically dies in Wicklow following choking accident
Conor Mcgregor hit by car ‘at full speed’ while cycling
Gwen Stefani reportedly pregnant with baby number four
No plans to abolish homework, says Minister Foley
You may also like
2 months ago
'Incredible' Netflix drama series is so good people are binge-watching it in one night
5 months ago
Peaky Blinders actor to star in Magdalene Laundries BBC drama
5 months ago
David Attenborough is coming to Ireland for new nature documentary
6 months ago
Prince Andrew's infamous BBC interview to be made into a film
7 months ago
BBC issues correction after using Irish tricolour during jubilee concert
8 months ago
Deborah James thanks fans as book goes straight to top of Amazon's bestsellers
Next Page