While the festival officially kicks off tomorrow, all we can wait for is the main event.

With street-theatre, pageant companies and marching bands from across Ireland and the world gracing the city centre, it's definitely going to be a parade to remember. 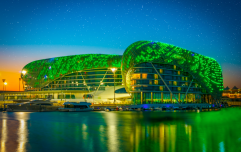 END_OF_DOCUMENT_TOKEN_TO_BE_REPLACED

More than 3,000 people in total will join together for the National St. Patrick’s Festival Parade which kicks off at 12pm from Parnell Square on St. Patrick’s Day, Sunday March 17.

A massive half a million people will line the Parade route to experience the magnificent creations and flamboyant performances, inspired by Irish stories, old and new.

The official line up says: "They will be joined by Marching Bands from across the world, weaving their way through the capital city in a dazzling spectacle of pageantry and musical scores, one of the biggest street festivals in the world. If you can’t make the Festival Parade, catch all action live on RTÉ One TV and across the globe on the RTÉ Player."

Girls With Goals || Her · Ep.161: Feeling Peachy - Sharon Keegan of Peachylean on being an absolute BOSS!
popular
The DIY frozen coffee recipe that's so delicious you'll never pay for an iced latte again
Khloe Kardashian has JUST confirmed she is pregnant
How to INSTANTLY unblock your stuffy nose (we swear this works)
Here's what happens on every day of your menstrual cycle (roughly)
Why Are Men so Obsessed With Boobs? The Answer is Pretty Surprising...
The entire Twilight Saga is coming to Netflix this month, and we're so ready
"There is a difference": Holly Willoughby calls out porn director's view of "normal" sex
You may also like
3 months ago
Niall Horan to headline virtual St Patrick's Day event to shine light on the pub trade
3 months ago
Gemma Collins' famous quotes have been translated into Irish, just in time for Paddy's Day
3 months ago
You can get Krispy Kreme’s St Patrick’s Day donuts delivered today
3 months ago
Health officials urge public not to get takeaway pints on St Patrick's Day
3 months ago
This limited edition Shamrock Gin is about the save your lockdown Paddy's day
3 months ago
Clodagh McKenna's Ultimate Guinness Cake is the only recipe you need for Paddy's Day
Next Page