Why do we bloat when we're on our period and is there a way to avoid it?

There's simply nothing good about bleeding for 4-7 days apart from the fact that you're not experiencing an unplanned pregnancy.

At any given time though, half the population will deal with the questionable process that is menstruation and all the less than ideal things that come with it. 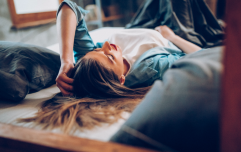 END_OF_DOCUMENT_TOKEN_TO_BE_REPLACED

Bloating is definitely one of the most frustrating things that comes with bleeding month-on-month because for many of us, there simply is no escaping it.

So, why do we bloat so much on our periods?

In the lead up to menstruation, our progesterone and oestrogen levels are a bit all over the place.

Lowered levels of progesterone are basically what causes our bodies to start bleeding, but these hormone changes are also thought to be the leading cause of why our stomachs feel so bloated and full around this time.

A study conducted in 2010 showed that these hormone changes can cause more water and salt retention in the abdomen, meaning that the swollen feeling is actually due to a build up of fluid and salts rather than the fact that we've just eaten an entire tub of Ben & Jerry's. 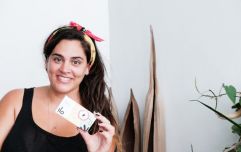 END_OF_DOCUMENT_TOKEN_TO_BE_REPLACED

As it turns out though, it could also be because of that too - grim, we know.

Low levels of serotonin tend to make us want to stuff our faces with things like chocolate, crisps, and whatever unhealthy crap we can find at Spar at 11pm at night. This (you guessed it) makes us bloat.

Is there any way to avoid bloating?

In short, no - there's no way to totally avoid feeling bloated before your period if that's what you're prone to.

Still though, there are certain things you can try that might make a slight difference to how you feel. 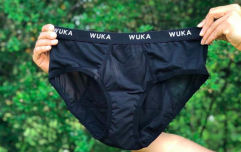 END_OF_DOCUMENT_TOKEN_TO_BE_REPLACED

In general, eating less carb-based foods is a good way to reduce bloating - as is avoiding salty food which increases water retention.

Eating foods that are high in potassium could help with the bloat because they can reduce sodium levels and encourage you to pee more.

Similarly, drinking a lot of water will keep you super hydrated and could alleviate some of the water retention. As can exercising, so if that's something you feel up for when you're menstruating, make sure you're doing as much of it as possible.

Feeling bloated could also have something to do with your birth control too.

Many women have reported feeling more bloated when on the pill, however others have said that they felt the opposite effect when using the oral contraceptive.

A decade-old study showed that the pill could actually improve a woman's bloat in the lead up to her period. But as with all things contraception, you should always consult your GP before you go making changes to what you're putting into - or not putting into - your body.

What other symptoms do people experience in the lead up to their periods?

Apart from a lot of bloating, the majority of women also tend to experience mood swings in the lead up their periods.

Premenstrual Syndrome, or PMS, is thought to be caused by rising levels of oestrogen as ovulation comes to an end, leading to emotional shifts that can affect about 80 percent of us in the days before we start bleeding.

Once our period actually comes, these symptoms are likely to disappear just leaving us to the deal with the bloat.

However, there are some cases where a premenstrual mood swing isn't just a mood swing and is actually something more worrisome.

Premenstrual Dysphoric Disorder (PDD) is a condition that causes people to become severely depressed, anxious, and irritated in the weeks leading up to their periods.

The disorder affects between three and seven percent of menstruating women and although its symptoms are often mistaken for regular PMS, PDD is actually included on the American Psychiatric Association's list of mental illnesses.

Some people can also experience intense food cravings in the lead up to, and during, their periods too.

This is most likely due to the low levels of serotonin present in our bodies during this time, leading to the desire to fill ourselves with sugary and carby foods which, in turn, can then make our bloating and mood swings even worse.

Because of course it can.

A lot of women also report feeling way hornier while they're on their periods. Like, waaay hornier.

In theory, this should actually be the opposite. During menstruation, you're not ovulating, your body knows you're not pregnant this month, so you're essentially less fertile than you were 10 days ago.

Whether it's because knowing we're far less likely to become pregnant during this time makes us want sex even more, or because there's a lot of different things going on in our pelvises when we're on our periods, being super aroused for whatever reason doesn't come with a rule book.

But feeling hornier when you're on your period is definitely a thing - and it's far preferable than feeling bloated or sad, to be honest.

popular
You stars Victoria Pedretti and Dylan Arnold spark romance rumours
Forensic officers continue search for missing 4-year-old Cleo Smith
Someone has ranked the penis size of men from all over the world
Brian Laundrie parents 'to cremate body with no funeral' amid mystery over cause of death
Why Are Men so Obsessed With Boobs? The Answer is Pretty Surprising...
15 signs that prove someone is falling in love with you
The most popular baby names in Ireland have been released in Statistical Yearbook 2021
You may also like
3 weeks ago
Dad speaks out after school tells daughter period pain is not a valid reason to miss class
4 months ago
PrettyLittleThing has just released a Love Your Period €30 Beauty Box
5 months ago
You can now buy period underwear in Penneys for €7
5 months ago
1 in 5 of women with heavy periods will have an underlying bleeding disorder
2 years ago
Periods syncing? Apparently it's your body's way of protecting you from men
2 years ago
Got your period? Try to avoid these foods as much as possible
Next Page